It's not everyday that one encounters Japanese cai png (economy rice).

But there I was one evening with a bowl of aburi (flame-seared) goodness from Hideki — a juicy, grilled chicken cutlet, seasoned baby octopus, a gorgeous, quivering onsen egg and, the sublime seared salmon belly which was charred on the outside but softer than clouds on the inside.

And of course, not forgetting the png in cai png — a bed of Japanese sushi rice nestled below. 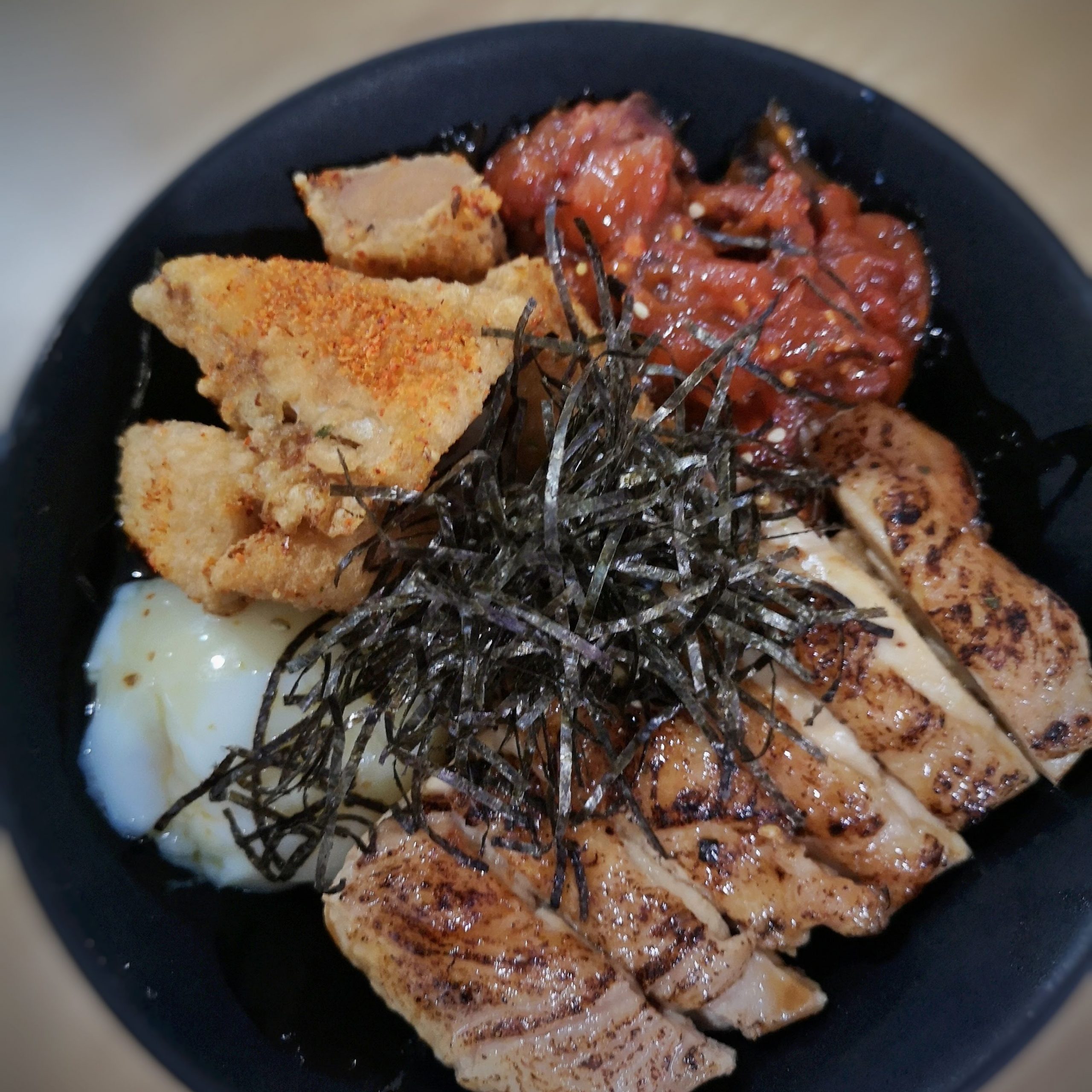 This bowl of high-calorie goodness comes courtesy of 26-year-old Nicholas Loh, the chef at Hideki, an unassuming hawker stall tucked away in a corner of Yishun Park Hawker Centre.

The first thing that strikes you about Nicholas Loh is his radiant enthusiasm for food. He would veer off mid-sentence to extol the virtues of his shoyu marinade or squeal with delight at the miracle that is a sous vide machine.

He credits his grandmother for cultivating this passion in him.

The matriarch of Loh's family was a formidable cook, but she never allowed her grandson to help out whenever she was in the kitchen, says Loh.

"She was the type who will tell me, 'you go out of my kitchen lah!'"

The boy would slowly learn to pick up skills like cutting and slicing from his grandmother by observing her from his place by the kitchen doorway. Seeing Loh — who calls himself an ex-Ah Beng — pick up culinary skills so easily impressed her.

"She was quite impressed because last time I only played games, sleep, you know lah, this kind of Ah Beng pai one lah."

To an observer, Loh ticks all the boxes of a seemingly dysfunctional childhood: Divorced parents, a home plagued by a constant stream of screams and quarrels, struggling with anger management, and dropping out of secondary school after his second year.

It was a trying time for him, and if he hadn't gone out to work in the culinary industry at the age of 14, he might be a completely different person today, says Loh.

Starting out as a waiter at 14

He started out right at the bottom as a waiter in a Japanese restaurant ("You feel like an ant. No, not even an ant — a speck of dust!") in 2009.

One of the biggest things he had to learn as a young wait staff was to swallow his words — even when he was not in the wrong.

Loh remembers encountering a particularly difficult customer — a "Karen" in today's lingo — who insulted his mentor after she (wrongly) accused him of bringing the wrong order.

Before he could snap back, Loh's manager stepped in to placate the customer. His colleagues understood him and taught him a very valuable lesson, says Low:

"In life, no choice you have to endure everything. In life, there's always someone who is bigger, better, stronger than you. When people cause conflict, as long as you don't retaliate, you're not causing conflict."

From dishwasher to chef

After three years of serving up sushi and green tea, and yelling "irrashaimase!", Loh started apprenticing with a catering company, as a dishwasher ("You have to first understand how the place works, how every one fits together, before you can move on to other things") before he was allowed to touch a stove.

His very first dish that passed was a sautéed and braised chicken.

Cooking with a catering company was — in Loh's words — "freaking hell". The cooking was done in bulk — unlike anything he had ever seen.

Vegetables — like cabbages and potatoes — came in gigantic baskets to be peeled. Once, Loh peeled two baskets of potatoes in two hours until his fingers became shrivelled and blistered.

And then there was the wok, which Loh estimates to be around 10kg. Imagine flipping 20kg of rice around.

Every Chinese New Year, the catering company cooked for around 6,000 people daily.

"We would start work at 6am, come home at 6pm, come back to work at 2am, then we work until 2pm, and nap for a while before working until 10pm again. Then go home and sleep before coming back to work at 6am again. It was really crazy kind of timing."

After the catering experience, Loh went on to work in a French restaurant as well, but ultimately, he felt that Japanese cuisine was where his passion lies, which is the reason why he set up Hideki.

"There's discipline and finesse. It's what I call the epitome of cooking."

The idea to serve Japanese fare cai png style came to Loh as a sudden burst of inspiration — to allow people to customise their rice bowls however they see fit.

At Hideki, you start with a base of either sushi rice, soba noodles, or a garden salad. Then you layer that with your choice of protein (I'd suggest the chicken), a sauce, and sides ranging from S$1 to S$2 per portion (go for the salmon belly bites).

At its cheapest, a rice bowl from Hideki can go for S$5.

The weirdest combination he had ever heard of was rice on top of soba noodles, coupled with chicken and pork, and then piled on with a whole assortment of sides.

"It was a very weird bowl," he laughs.

Listening to Loh, it's quite clear that he takes a great deal of pride in the Japanese cai png bowls that he whips up for his customers.

His secret shoyu marinade is made with imported shoyu and mirin.

This concoction is used to marinade his salmon for up to 24 hours, and his chicken and pork for up to 48 hours, before they are cooked sous vide-style to retain their juiciness.

When it comes to searing the cooked salmon steaks, Loh says that he doesn't do it on both sides because that would only produce "charcoal black" fish — that's not good.

"You want it to be charred (on one side) so that you get the crispy texture and the soft salmon flesh."

Loh's approach to producing affordable Japanese food has earned him a number of fans, who praise his food for its value, creativity, and big portions.

And it looks like he is not stopping any time soon; he recently opened a second outlet in the CBD.

"At the end of the day, that's my life passion. To me, it's not just about making money. It's about making people happy."