A 25-year-old man has been arrested by the police for causing public nuisance at a taxi stand along River Valley Road.

The incident happened on the evening of Mar. 25 and was captured on camera by onlookers.

In response to Mothership's query, the police confirmed that they were alerted to the case of dispute at 10:31pm.

A 2-minute video which is circulating online shows the agitated man in a heated argument with a woman at the taxi stand. A policeman who was present tried to calm the man down. 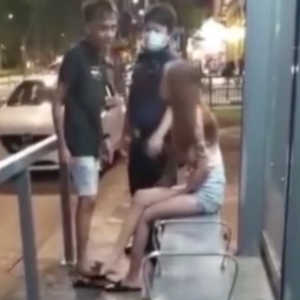 The woman can be heard saying that the 25-year-old had hit her.

"Just now you tell me you are going to call the police, you tell me what did I do to you?" the 25-year-old questioned the woman in the presence of a policeman.

The policeman tried to restrain the man, asking him to calm down while he was lashing out at the woman who sat in silence.

When the policeman pulled him back, he retorted, "Can you don't touch me? Who do you think you are to touch me?"

The man also slapped himself several times while confronting the woman.

At one point he even hit his head against the notice board and the bench at the taxi stand. 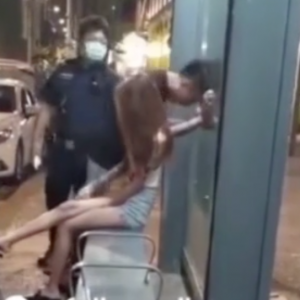 Slapped the woman in front of the police

The woman later said that the man strangled her when the man asked why she was upset with him.

The man retorted that the woman pushed him and hit his private parts twice.

The policeman urged the 25-year-old to calm down and tell him what happened but the latter ignored him.

The man then proceeded to slap the woman in front of the policeman after asking her, "How many times do you want to sabotage me?"

That prompted the policeman to pull him away, shouting "That's enough!"

Another policeman subsequently came over to help subdue the man. 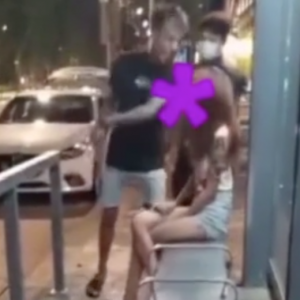 While resisting, the man shouted, "Do you know who's my mother?"

He let out a loud scream after being pinned on the ground as seen in another video which was circulated online. 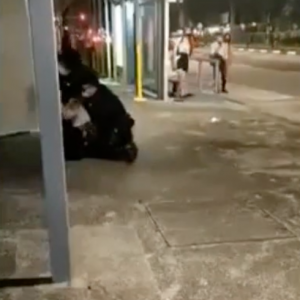 Investigations are ongoing, the police added.

Update on Mar. 29, 6:40pm: A previous version of this article stated that the incident happened at a bus stop, it is actually a taxi stand. We have amended the article for accuracy.