An elderly woman wearing a purple singlet was spotted walking around in the middle of the traffic junction in the vicinity of Yishun Street 21 and Yishun Ring Road, knocking on car windows attempting to sell tissue packets to drivers.

A Facebook user shared in local community group Complaint Singapore that the elderly woman was seen walking around without a mask.

She would appear almost daily at the same location asking drivers to buy tissue packets from her. 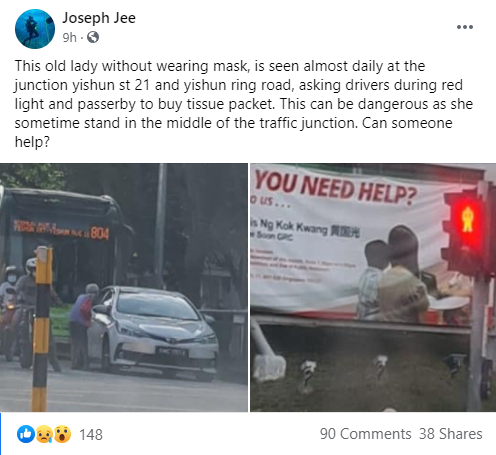 The 68-year-old woman could be seen approaching cars whenever they stopped at the junction, appearing to be speaking to the driver. 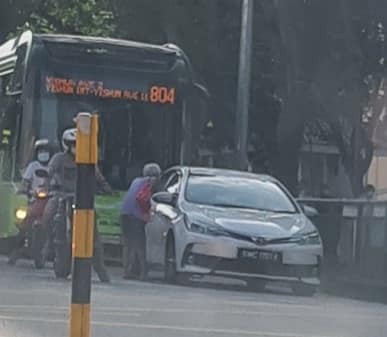 Selling tissue packets at road junction for roughly a year

When reporters from Lianhe Wanbao went to the area to investigate, many residents were aware of the elderly woman.

In fact, they shared that she had already been selling tissue packets at the traffic junction nearly every day for roughly a year.

One resident told the Chinese daily that she often waited by the pavement until cars stopped at the red light, before rushing over to sell her tissue packets.

"She would knock on the car windows of a couple of cars, ask if they wanted to buy some tissue packets from her. She sells them at S$2 for three packets. Once the traffic light turns green again, she walks back to the pavement to wait," the resident shared. 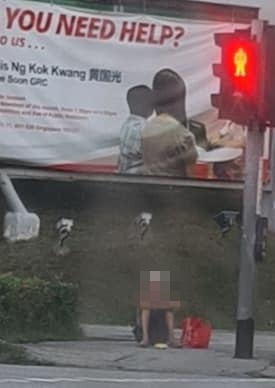 Another resident mentioned that she would also board the bus at times to sell tissue packets. She added that the woman had a rather bad temper, and would shout at other passengers on the bus if they refused to buy from her.

She wouldn't pay for the bus ride at times as well, the resident added. Whenever the bus captain asked her, she would retort that she had no money nor a face mask.

The resident added that the elderly woman was usually decked out in gold accessories.

Other residents added that she used to sell tissue packets at a nearby coffeeshop around two to three years ago.

However, she moved from the coffeeshop to selling by the traffic junction as "business was bad" at the coffeeshop, one resident claimed.

The resident opined that customers at the coffeeshop probably did not want to buy from her as she was selling three packets for S$2, the Chinese daily reported.

While some residents who were concerned for her safety tried to dissuade the elderly woman, but they were allegedly scolded by her when they attempted to do so.

The elderly woman told Lianhe Wanbao that she sold tissue packets so that she can reduce her family's financial burden, and also for charity.

She said that she started selling tissue packets at a coffeeshop nearby, but shifted her target to motorists and bus passengers due to "bad business" at the coffeeshop.

The elderly woman added that both her husband and son are working, and her husband would give her allowances as well. However, she did not want to increase her family's financial burden.

"I can make around S$300 selling tissue packets every month. I can save part of it, and give a portion to charity," she said.

She also explained that the gold accessories she wears, saying that they were bought over 30 years ago.

The elderly woman stressed that she would "look out for her own safety" every time she sold tissue packets at the traffic junction, and made sure only to approach one to two cars at a time, before returning to the pavement.

On her bad temperament, she claimed that she would only retort if people were rude to her first.

When asked why she didn't wear a mask, she told the Chinese daily that she usually carries one with her, but as she gets breathless easily, she did not put it on.