A pair of cyclists were caught on camera beating a red light along Tanah Merah Coast Road -- only to be stopped a minute later by a Traffic Police on a motorcycle who chased after them.

A video of the incident was put up on Facebook on March 15.

The footage was shot from the camera attached to the bicycle of another cyclist trailing behind the traffic light-beating duo.

The footage of the duo beating the red light can be viewed from the 1-minute 17-second mark.

The cyclist recording the footage stopped at the red light with another fellow cyclist.

The footage showed the two other cyclists riding ahead failing to form up behind the white line when the traffic lights were clearly red.

Shortly after stopping, one of them was heard on audio talking about the duo who beat the traffic light: "They have a death wish."

The sound of a motorcycle pulling up, believed to be the Traffic Police, was also heard within a split second.

Another voice, believed to be the Traffic Police, then asked: "Do they belong to your group of friends?"

In response, a voice believed to be one of the cyclists, said: "We're trying to stop them but they just went off."

This was followed by some banter between the cyclists and the Traffic Police as they waited for the lights to turn green.

One of the cyclists then said, perhaps in response to the Traffic Police's motorcycle: "Nice bike man. 1,000cc?"

The same voice also asked if the motorcycle was "heavy".

Within seconds, the traffic light turned green and a Traffic Police could be seen accelerating from the next lane on the right and disappearing from the frame.

The sped-up portion of the video initially showed the aftermath of the Traffic Police catching up and puling over the two cyclists who beat the red light. 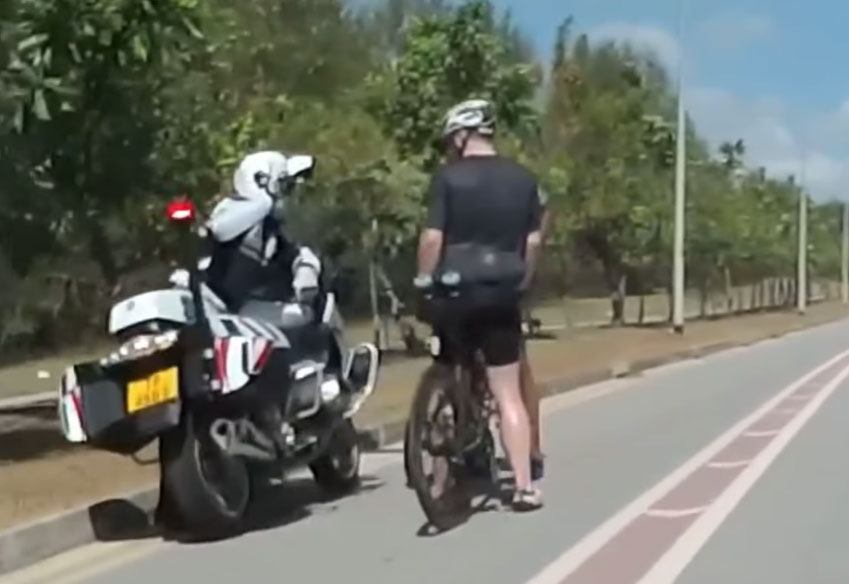 It can cater to two cyclists riding abreast.

The bicycle lane is marked out in both directions on the road.