A Grab driver slowed down as he was approaching a red light, but the lights turned green before he came to a halt. He proceeded forward, only to collide with a cyclist who later insisted that he had the right of way.

Three video clips of the Mar. 6 incident were uploaded by the driver's son, Kirby Lim, who took to Facebook to share the footage and seek opinions.

What the videos show

The first video, recorded by the driver's dashcam, show the driver approaching the junction of Scotts Road and Orchard Road, on the extreme left lane. At this point, the lights at the junction ahead are red for the driver. Vehicles travelling along Orchard Road are seen driving across the junction, with the lights in their favour.

As the driver approaches the stop line, however, the lights change and turn green, and the driver proceeds to drive on.

Then, as vehicles start to move forward along with the Grab driver, a male cyclist enters the frame from the left and collides with the car.

Why did the collision occur?

It appears that the Grab driver and cyclist did not anticipate the collision, as their view of each other was obstructed by a bus in the next lane.

Video footage from another angle — provided to the Grab driver by a motorcyclist on a different lane — showed that vehicles in all five lanes had started to move forward after the lights changed:

The Grab car likely moved forward faster than the other vehicles as it did not come to a complete stop earlier.

Did the cyclist run a red light?

Since the videos were uploaded on Mar. 29, they have been circulating on groups such as SG Road Vigilante and Complaint Singapore, attracting comments mostly in support of the driver, saying that the cyclist had run a red light and had been in the driver's blind spot.

The lights were clearly red for the cyclist at the point of collision, since they had already turned green for traffic along Scotts Road.

However, it is not clear as to whether he indeed ran a red light, as the last car to cross the junction was seen passing in front of the Grab driver around five seconds before the collision.

It is possible that the cyclist crossed his stop line into the road junction while the lights were amber, but was not able to reach the end of the junction before the signal turned green for the vehicles waiting along Scotts Road.

The cyclist would have had to cycle across nine lanes and a road divider, for a total distance of around 50 metres, which would have taken between seven and nine seconds at a speed of 20 to 25 km per hour. 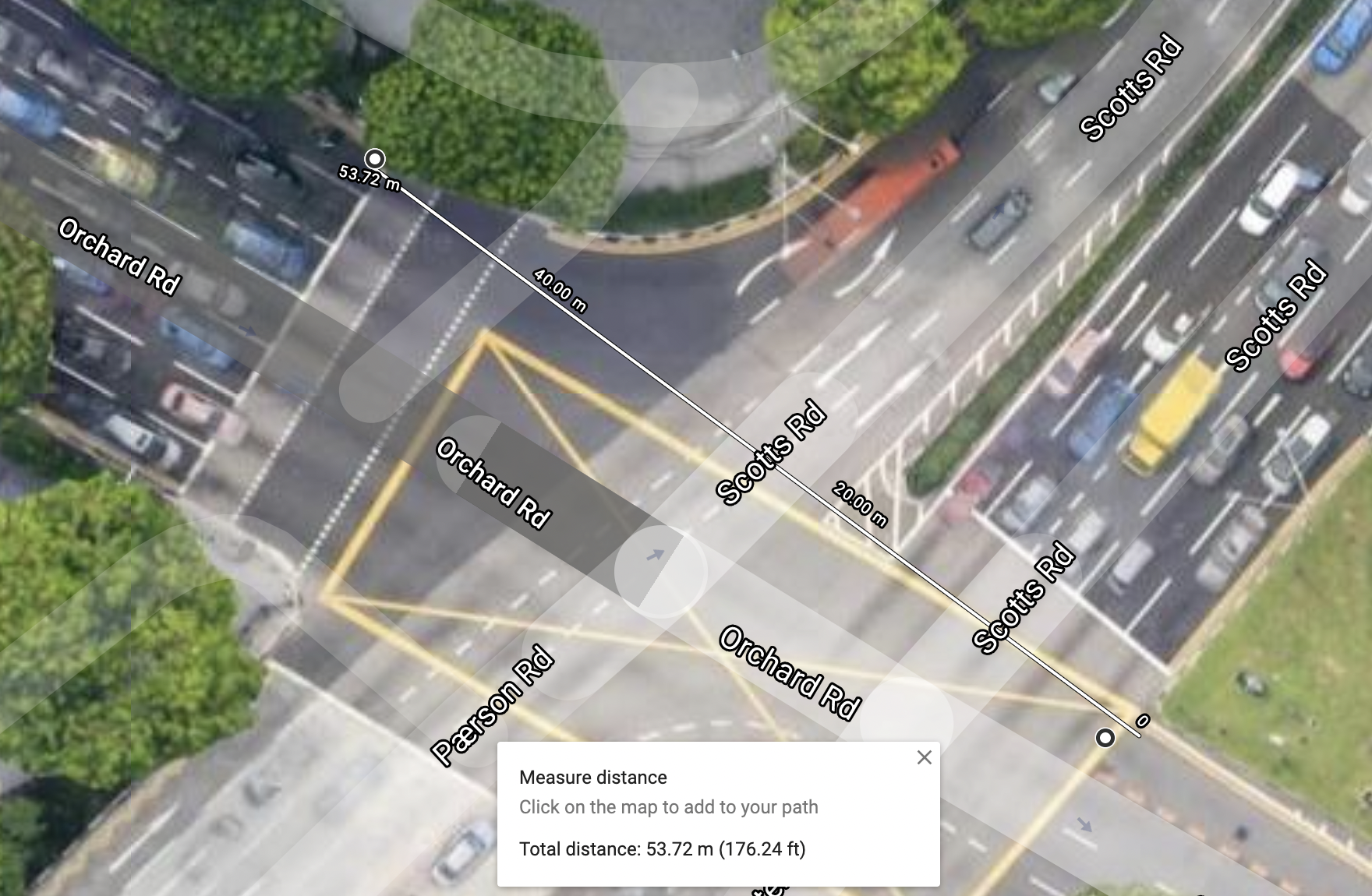 Result of the collision

Shortly after the collision, the cyclist stood up and walked over to the pavement near Ion Orchard, without requiring assistance from a passerby who came over to check if he was alright.

The cyclist apparently insisted that he had the right of way, according to Lim, recalling his father's account of what happened. However, this was not captured on camera as the dashcam does not record audio.

The cyclist was later taken to the hospital after the driver called for an ambulance for him.

The driver, on the other hand, has had to incur repair costs to get the car running again, and has also lost a week's worth of income while the car was being repaired, Lim told Mothership on Mar. 30.

As the car was rented from a rental company, the driver will also have to send it for cosmetic repairs at some point.

Lim said that while his father hopes his insurance policy will cover the losses, it is uncertain whether his claim will go through.

"This incident has definitely taken a hit on our family both financially and emotionally as we are a family of six," said Lim. "We do not want to finger point but this incident has also revealed how much limited protection drivers on the road have," he added.

Meanwhile, Lim shared that a police report has been lodged against the cyclist.

The police confirmed to Mothership that they were alerted to the accident, and said that investigations were ongoing.