The Ministry of Health (MOH) has confirmed 30 new cases of Covid-19 in Singapore on Thursday (Dec. 31).

There are five cases in the community.

Case 58810, who was confirmed and verified as a new community case yesterday (Dec. 30), is a Singapore Permanent Resident who works as a Marine Surveyor at Lloyd’s Register Singapore.

Case 58842 is a 46-year-old female Singapore PR who works as a freelance florist at her place of residence at Ghim Moh Road.

She developed symptoms on the same day and was conveyed to the National Centre for Infectious Diseases (NCID) in an ambulance, where she was tested. Her test result came back positive for Covid-19 infection the next day, on Dec. 31.

Her test result came back positive for Covid-19 infection on Dec. 31 and she also started to develop symptoms on the same day.

She is a student of Raffles Girls’ School, and her last day in school was on Dec. 23.

His work entails going onboard vessels to navigate them through congested waters.

He is asymptomatic and was detected from the Rostered Routine Testing (RRT) of workers in the construction, marine and process sectors on Dec. 28.

His test came back positive on Dec. 30 and he was conveyed to NCID in an ambulance.

His serological test result has come back negative, indicating that this is likely a current infection.

His earlier tests from RRT had been negative. His last test before the positive test was on Dec. 12.

He stays at Marine Crescent and often visited his relatives who stay in a neighbouring block.

It was revealed that on Dec. 13, he had visited Parkway Parade with 7 other individuals.

Investigations are ongoing to assess if there had been any breach of the relevant prevailing safe management measures.

They are relatives of Case 58817 and reside at Marine Crescent.

On Dec. 28, both cases developed acute respiratory infection symptoms but did not seek medical treatment.

On Dec. 30, they were both placed on quarantine as they had been identified as close contacts of Case 58817.

As they were already symptomatic, they were conveyed to NCID in ambulances, and subsequently tested positive for Covid-19 infection.

Epidemiological investigations are ongoing. In the meantime, all the identified close contacts of the cases, including their family members and co-workers, have been isolated and placed on quarantine and will be tested at the start and end of their quarantine period.

Serological tests will be conducted for the close contacts of these cases to determine if the case could have been infected by them.

Amongst the imported cases, five are Singaporeans or Singapore Permanent Residents, and nine are foreign domestic workers.

Amongst the 25 imported cases,

• Two are Singaporeans and 3 are Singapore Permanent Residents who returned from the UK, Indonesia and India.

• Two are Work Pass holders who arrived from the Philippines and India.

• 14 are Work Permit holders who arrived from Indonesia, Bangladesh, India, Philippines and Myanmar, of whom nine are foreign domestic workers.

• One is a Dependant’s Pass holder who arrived from India.

• One is a Long-Term Visit Pass holder who arrived from India.

• One is a Short-Term Visit Pass holder who arrived from India to visit her Singaporean spouse.

• One is a Special Pass holder who is a crew member of a ship which arrived from Hong Kong. He had not disembarked from the ship until he was conveyed to a quarantine facility after being identified as a close contact of an overseas case. 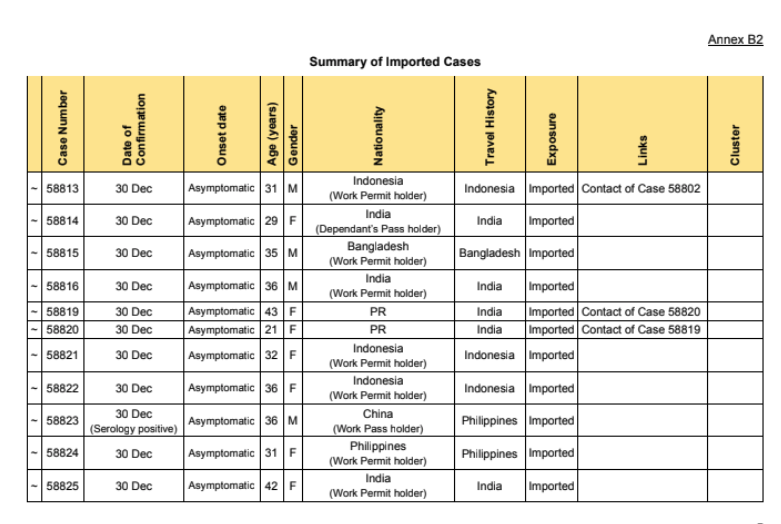 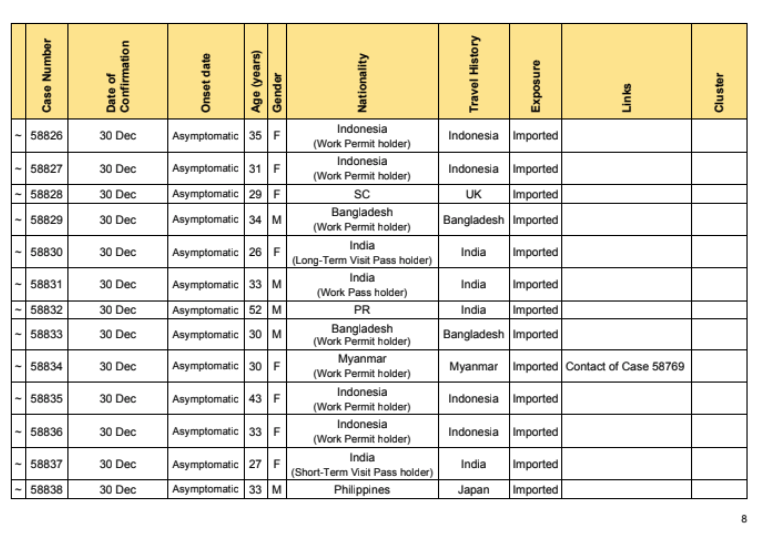 38 more cases of Covid-19 infection have been discharged from hospitals or community isolation facilities.

In all, 58,449 have fully recovered from the infection and have been discharged from hospitals or community care facilities.

There are currently 57 confirmed cases who are still in the hospital. One is in critical condition in the intensive care unit.

64 are isolated and cared for at community facilities.

Four new locations were added to the list on Dec. 31.

Here's the complete list of locations visited by cases in the community during their infectious period: 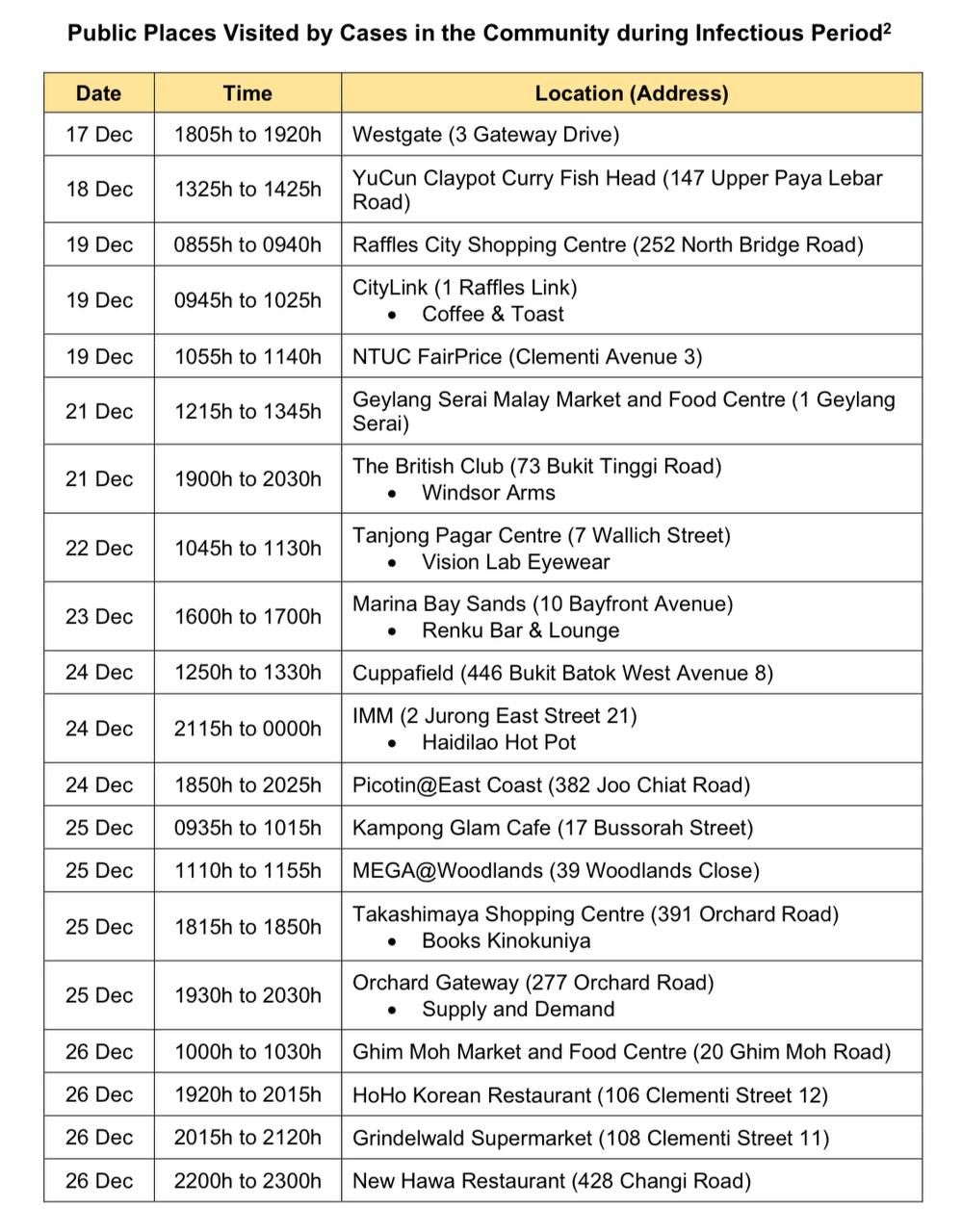