If there’s one thing my neighbours’ kids love more than anything, it’s PAW Patrol. There’s just something about the canine crew that gets the kids all giddy with excitement.

So when City Square Mall announced that it would be hosting a PAW Patrol-themed treasure hunt, which takes place in both physical and augmented reality, I wasted no time in asking my neighbours if they and their kids would like to head down.

Constantly tiring their parents out by exploring and getting into trouble at home, Luna (3 years old) and Leo (5 years old) were in for an engaging excursion packed with eye-opening experiences. Would I survive my day of co-parenting? Mentally prepared and packing emergency Red Bull in my bag, I kept my eyes glued on the kids.

Quite the visual spectacle, City Square Mall has been decked inside and out with PAW Patrol-themed Christmas decorations. Luna’s eyes immediately lit up at the sight of her favourite cartoon characters in cute festive getup.

The kids and I couldn’t wait to embark on this new and unique experience. Once we scanned the QR codes at the start point, our epic treasure hunt began.

To our surprise, we were greeted by colours, shapes, stories and characters in both physical and virtual reality. One QR code showed a video explanation of how to participate in the treasure hunt, while the other demonstrated how to take augmented reality photos with the characters of PAW Patrol. I was very impressed by this treasure hunt’s attention to detail, and its ability to capture children’s attention.

After several attempts to get a very camera-shy Luna to pose for a photo, we were finally successful.

Happy that they managed to take photos with their favourite PAW Patrol characters, both Luna and Leo eagerly helped to solve the short quizzes and jigsaw puzzles at each station. Upon accomplishing each mission, we received a stamp. 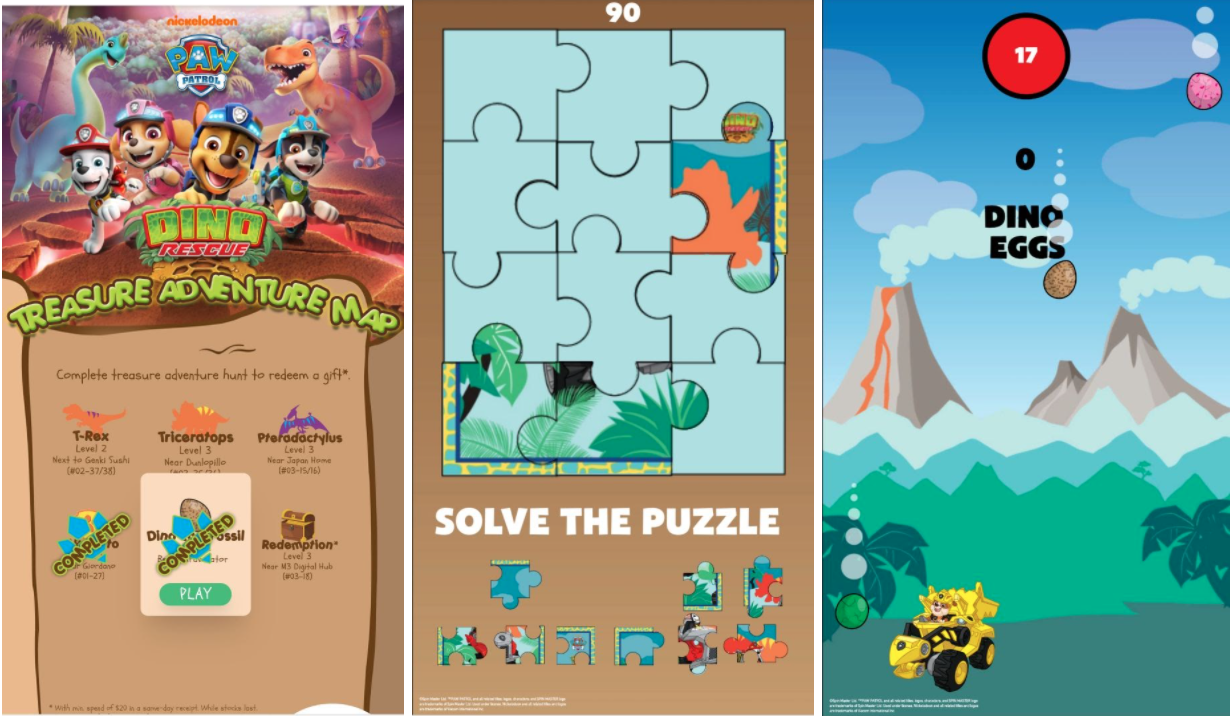 After racking our brains at the different stations, we managed to collect all five stamps, which also meant that we could redeem a PAW Patrol-themed prize. Luna was especially thrilled at the thought of this.

While Luna had a blast, Leo, who isn’t that into PAW Patrol, was nonetheless absorbed by the easy-to-understand activities.

Leo’s and Luna’s attention usually fleet quickly from one thing to another. Today, however, they were compelled by the games, which required them to put on their thinking caps and taught them a thing or two about dinosaurs.

The kids seemed mesmerised by the treasure hunt - as the challenging tasks drew them in, our trek from station to station gradually sped up into an Amazing Race-esque sprint.

At the redemption counter on the third floor (#03-18, near M3 Digital Hub), the kids happily received their prizes of the PAW Patrol stationery sets. Grinning from ear to ear, Luna said that she couldn’t wait to use it when school reopens in January.

I mean, getting prizes for playing games? The young me would’ve loved that as well.

Afterward, we proceeded to the Singapore street food-themed Food Republic on the fourth floor, which is furnished to look like rows of shophouses. There, we rewarded ourselves with HJH Maimunah’s Michelin Bib Gourmand-winning nasi padang.

Since everyone was in high spirits (and it’s the season of giving), Leo and Luna’s parents decided that they would buy one more toy each for their kids from Toys“R”Us. Unsurprisingly, Luna picked a new PAW Patrol school bag to go with her new stationery set, while Leo increased his Hot Wheels collection by three cars.

We continued to walk around the mall to check out the rest of the Christmas decorations until it was time to head home.

I have to admit, I was pretty worn out at this point.

Bringing two energetic kids on a treasure hunt isn’t a walk in the park, but as clichéd as it sounds, I felt revitalised when I saw the two of them have so much fun.

Additionally, there are exclusive Christmas offers at some of the shops:

This sponsored article in collaboration with City Square Mall makes this Mothership.sg writer want to be a kid again.

All images via Andre Frois.