A pet cat in Singapore was taken without permission and a S$2,000 reward is now being offered for the return of the domesticated family member.

The male cat, named Lolo, resides with his family along Robin Road in Bukit Timah.

An appeal for information about the cat's whereabouts has been put up after it was kidnapped on Sep. 16, 2020 with no fresh leads.

The cat, along with his family, have been in Singapore for the past two years after they moved here from Dubai.

According to information and CCTV video footage provided to Mothership by the family, an unidentified woman in white arrived in a white van along Robin Road on Sep. 16, 2020 at around 7:30pm and carried the cat away with her.

That was the last time the cat was seen.

According to information relayed to Mothership, a family in Dubai adopted Lolo when he was sick, malnourished, and mangled as he suffered from skin afflictions.

Despite having three other cats and a dog -- all are rescued animals -- the family took Lolo in and nursed it back to health.

When the family relocated to Singapore from Dubai two years ago, they brought along all five animals with them from the Middle East.

The quarantine cost per pet when they arrived in Singapore was about S$1,000 each.

Despite being domesticated now, Lolo is said to instinctively enjoy spending time outdoors and roamed around freely along Robin Road.

According to the family, Lolo was a familiar presence in the neighbourhood and residents have grown comfortable with him.

He would roam around the compounds of three households in the estate with fewer than 20 households.

He would cross different compounds via the grass patch and did not require using the roads to gain access to different properties.

Lolo would also roam around the car park, as well as other common public areas without issues.

Cannot be mistaken for a community cat

However, the family said Lolo has the habit of sitting on the walls of the compound. 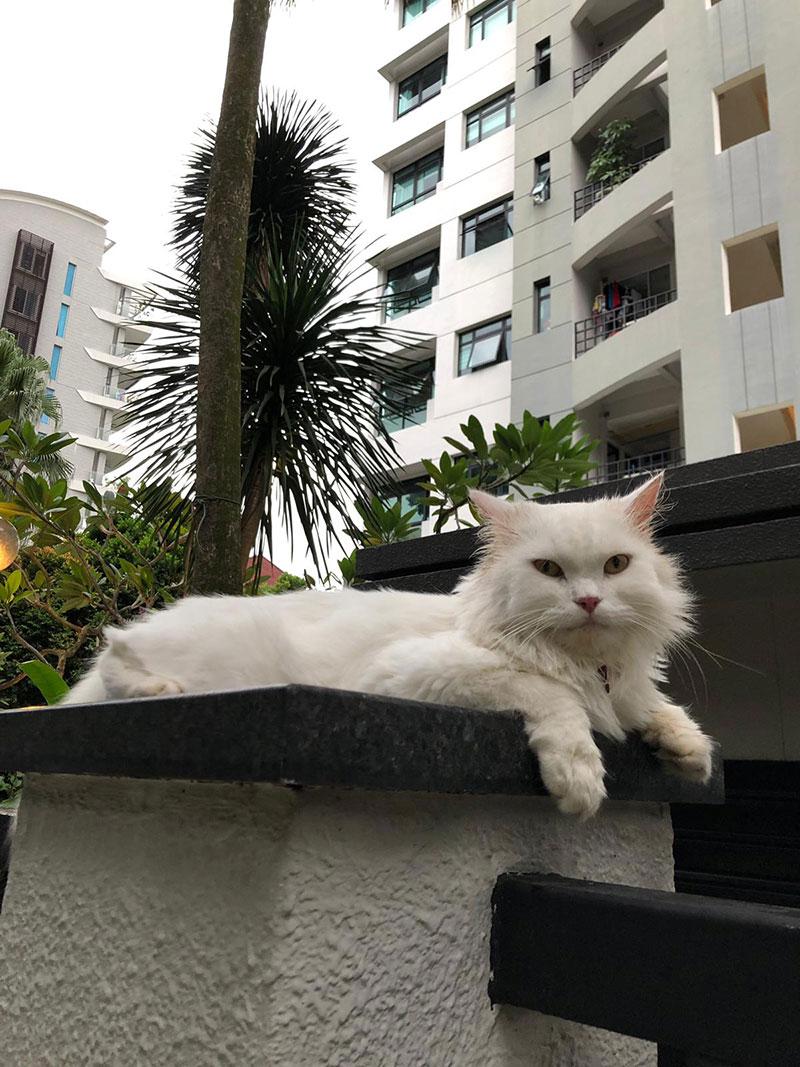 On the fateful day he was taken, Lolo was sitting on the lowest tiered wall facing the relatively busy Robin Road and within reach of passers-by.

The family emphasised that Lolo cannot be mistaken for a community cat or an abandoned pet as he was wearing a tag that read, "I am not lost" on one side, with an address and phone number indicated on the flip side.

Lolo's family said they miss him a lot, especially his blind, three-legged cat sister who still tries to look for him by sniffing around the house.

Anyone with information or would want to return the cat can contact 86091678.