The CEO of NTUC LearningHub, Kwek Kok Kwong, has passed away on Saturday (Nov. 14) at age 53.

He leaves behind a wife and two children.

Collapsed after cycling with friends

According to The New Paper, it is believed Kwek had collapsed at around 8pm in the Seletar area.

The incident had purportedly happened after a cycling session with some friends from his Victoria School days.

He was then conveyed to hospital but could not be resuscitated.

In a Facebook post on Nov. 15, NTUC LearningHub said that Kwek, who had been with the company for eight years, was a dedicated and inspirational CEO.

"Our deepest condolences go out to his family and to all who were touched by his generosity, kindness and compassion. We will miss him dearly."

Kwek's family and close friends have also set up a public Facebook group to pay their tributes. 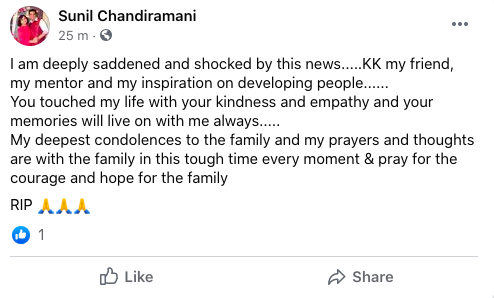 According to Kwek's LinkedIn profile, he had served with the Singapore Armed Forces (SAF) from 1990 to 2012 before moving to NTUC LearningHub.

He was chairman of the Singapore National Cooperative Federation since 2016.

Kwek was also the deputy CEO of NTUC First Campus between August 2012 and December 2015.