Nestled along Joo Chiat Rd, you might miss the storefront of Bubblypetz when you're walking past the many shophouses in the area.

Once you step inside this pet grooming store, you are transported into what looks like a MUJI showroom, with its wooden facade and the smell of a scented candle filling the air.

As you start to feel more peaceful, having left behind the tropical heat and the sound of the road behind, you don't see anyone at the storefront counter and so you venture further into the store, where you will find staff busy at work washing pets and trimming their fur. 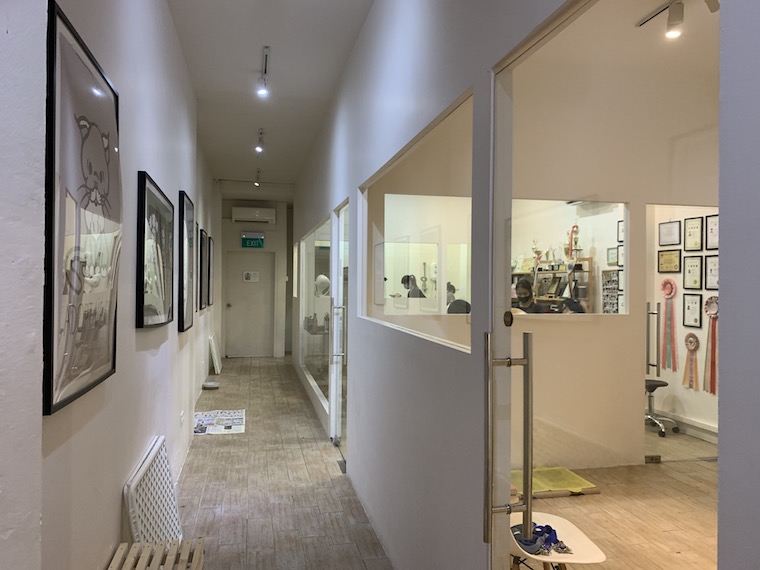 That's where we find Desmond Chan, one of the cofounders of BubblyPetz, who was finishing up on trimming the fur of this cute doggo:

Chan and his wife Maeve Suar, both 32 years old, founded Singapore's first humane pet grooming business in October 2014 that prides itself in being a "cruelty-free" and "eco-ethical" business.

It is an open-concept store that provides pet grooming service without the use of cages or rope restraints.

The store also carries products that are plant-based, eco-friendly, organic, and are not tested on animals.

The couple hopes that the two stores serve as a platform to spread the message that there are alternative methods of handling animals, and alternatives to pet products offered in the market.

We sat down with the two of them during their afternoon break to understand more about this rather unconventional pet grooming store in Singapore and their entrepreneurial journey.

Finding their passion through their first pet

It all began with their first pet, a shih tzu puppy called Chocolate, Chan and Suar told us.

The first-time pawrents took their responsibility of owning a pet seriously and researched extensively on how to care for Chocolate which was a young pup back then.

That was when they found themselves "going down a rabbit hole", as they learnt about various topics related to animal welfare, such as puppy mills, animal agriculture, and the pet grooming industry.

When they first started sending Chocolate for grooming at a neighbourhood pet grooming store, Chocolate's behaviour was very different after every session.

The couple observed that Chocolate, which is usually active and reactive to interactions, would appear restless upon returning from grooming sessions.

They also found that its nails were still long and that it was still a bit dirty, even after the grooming session.

The couple then decided that they would groom Chocolate on their own and that's how they took up pet grooming courses.

Today, 11-year-old Chocolate can be seen walking around the store, almost like a supervisor.

While talking about why they set up Bubblypetz, both Suar and Chan shared their past experiences of working at pet grooming places about a decade ago which played a part in this decision.

Suar said that she ever witnessed staff throwing cardboard boxes at caged dogs which barked to express their discomfort:

"They just put dogs into cages or like small little cages, and they wait for their turns to groom. So, of course, dogs in that situation, they tend to bark because it's like, maybe not enough stimulation, or they need to pee and poo, so they bark a lot. And then you can see how that time my other colleague who is the groomer, gets so pissed that she like throw cardboard boxes at them. So that's when I realised that there's a lot of dark stuff going on."

Unable to cope with the unpleasant practices at the places she worked at, she quit the job within three days.

As for Chan, who had worked in three pet grooming stores before, he recounted his experience of having worked at a store where groomers do not get to spend enough time understanding the needs of each pet:

He started to wonder if things could be done better, such as letting the owners know about sores seen on their pets.

Adding on to that, sometimes the owner of that store would only say positive things about the pet's experience even when the pet was struggling, according to Chan:

"The funny thing is, at the reception, when the dog gets checked out, you see them saying very wonderful things about the experience."

These not-so-pleasant experiences and their love for Chocolate have translated into the principles behind their business — one that puts the animals' well-being first and values honest communication with their clientele.

Turning their passion for animals into full time job

Before opening Bubblypetz, Suar worked as an event planner in the sports management industry.

Chan on the other hand was juggling his undergraduate studies, while working as a part-time financial advisor and part-time freelance pet groomer.

The idea to set up Bubblypetz came about when Chan was taking house calls as a freelance pet groomer in his final year of university, when he felt something was lacking.

The couple faced some doubts at the start from their family members, who perhaps not quite understand their career switch.

For Suar, she shared that her mother asked her to "go and find other jobs", and that even five years after opening their first store, she would ask her to look for other jobs to "earn more money".

Chan recounted that how every year at Chinese New Year for the first two to three years of starting the business, some of his family members would keep asking him to get a job in a bank.

Some aunties and uncles told him:

He would often respond by just laughing it off in such situations.

However, the sentiment has shifted over time.

The first turning point his relatives had was when the business was featured in a 2015 Chinese newspaper, Lianhe Zaobao, months after they set up the shop.

His relatives were pleasantly surprised to see the feature and congratulated Chan on doing a good job in the pet grooming industry.

The initial scepticism that the couple faced might have stemmed from the popular belief that being a pet groomer is an ideal job where one gets to play with pets all day.

That is not true.

Pet grooming is more than just playing with pets all day

Chan and Suar said the profession came with a high level of responsibility, especially when one is trusted with the care and well-being of an animal.

Besides trimming the animals' fur, groomers have to clean the animals' ears and shave their paws which "can directly impact how they are feeling on a day-to-day basis".

Grooming also involves challenging techniques that require very sharp tools and groomers have to be extremely focused and careful in the process.

The grooming task can be even more challenging especially when they are dealing with anxious or fidgety pets.

Chan admits that "there's no one method or way to help them calm down" as "each individual has its own set of unique circumstances".

That's why groomers will have to conduct a pre-grooming assessment with the owners to understand the animal's triggers and temperament so that grooming without rope restraints can be a smooth process.

The groomers will sit down with the owner in their holding room to run through a few things, such as:

Other ways they use to calm the animal down include the use of flower essence blends and giving treats with permission from their owners. In some circumstances, more groomers will also be involved to care for the pet.

Prior to Covid-19, pet owners are also encouraged to stay throughout the grooming session which will help comfort their pets.

Encouraging pet owners to be present at the store also helps to ensure the dogs do not wait too long in the shop before or after grooming.

This is important to ensure dogs from different households do not mingle when they come to BubblyPetz as the store does not have cages.

There are four allocated slots each day and the shop can attend to around six dogs daily, fewer than what a typical pet grooming shop takes in.

Despite so, Chan and Suar were able to recover their losses in two years' time.

All thanks to returning customers who do not mind paying the premium and new ones who learn about their store via word of mouth.

"We charge a little bit more... to give pets a little more space and give the animals more time for each grooming slot."

More recently, they have also opened a second store along the same road that is just for cat grooming called Hey Good Cat in August 2019. 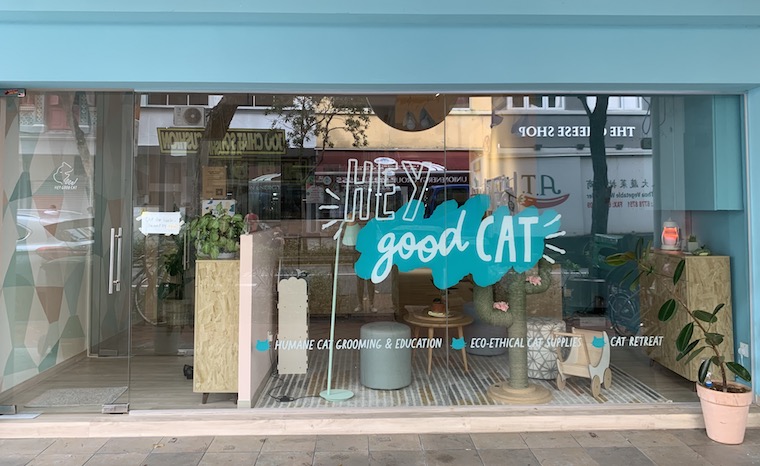 The couple saw both opportunities and the need to expand their business as there was an increased demand for cat grooming services and BubblyPetz had also reached the maximum capacity.

Furthermore, they observed that their feline clients get stressed getting groomed in a space with the smell or movement of dogs.

At the second store just for felines, this issue is no longer there.

Here's a cat enjoying a blow-dry and getting brushed by Chan:

And here's another kitty enjoying a blissful bath:

The couple are in the midst of recouping the capital they put into the business expansion Hey Good Cat.

Despite the Covid-19 situation, they have been able to sustain the business on top of being able to pay staff salaries fully in a timely manner.

Monday, Tuesday, Wednesday and Sunday: 10am to 7pm

Closed on Thursdays and Saturdays

Their full price list for dog grooming can be found here.

Monday, Tuesday and Thursday: 10am to 7pm

Closed on Wednesdays and Sundays

Their full price list for cats can be found here.