Here are the rules:

Top prize is an iPhone 11

The top prize, an iPhone 11, will be awarded to three winners and the remaining two runners-up will receive Grab vouchers.

It’s not too late for us to clinch the top spot, Singapore! We must win this ASEAN SPICY CHALLENGE! As an added incentive, we’ve decided to up the stakes by giving away an iPhone 11 (128GB) to 3 lucky winners plus Grab vouchers (worth $20) to 2 runner-ups, exclusive to Mister Potato Singapore only. Chiong to aseanspicychallenge.com now and upload your videos on Instagram. Don’t forget to include #ASEANSpicyChallengeSG and #MisterPotato. 🔥 Contest ends 16 Aug 2020, 11:59pm. Open to individuals residing in Singapore only. #MisterPotatoSG

On Sep. 8, the winners were announced. Three of them won an iPhone 11 each.

Meanwhile, 10 runners-up -- instead of only two, which was originally intended -- received Grab vouchers.

You definitely brought the heat, amigos! 🔥 You made choosing the winners tough on us so we've decided to give away 10 Grab vouchers instead of just 2! 😉 Congratulations to all the winners and thank you for participating in the #ASEANSpicyChallengeSG! Please DM us for prize collection details. Stay tuned to our page for more exciting challenges! #MisterPotato #MisterPotatoSG #Daebak

Not pleased with the results

One of the runners-up, @hakimashi, wasn't particularly pleased with the results as he felt that he should have won the top prize.

Here is his entry for the contest:

In a series of Instagram stories, Hakim contacted Mister Potato to express his displeasure.

"Hey there, we understand that you may be disappointed however there were many great entries, which is why we decided to give away 10 Grab vouchers instead of 2 as originally intended."

Hakim appears to still be unsatisfied, and subsequently, stated that he would be bringing up the issue with Mister Potato's human resource team.

He also apparently posted another Instagram story which said: "Mark my words @misterpotatosg Your international sales and Marketing will contact me shortly."

But Mister Potato Singapore explained in their response that the contest was held locally and was not related to its global offices.

It added: "All decisions made by Mister Potato Singapore are absolute and final."

Mister Potato Singapore also asked Hakim if he was still interested in redeeming his Grab voucher.

Hakim agreed to take the voucher, although he was still keen on speaking to someone "in charge".

He also told Mister Potato Singapore that he wanted to speak to its management.

In the last Instagram story, Hakim said: "Well this might be the end of this journey... My effort not being recognized."

Allegedly bullied the other winners

On Instagram today: entitled guy can't accept the fact that he didn't win first place because he THINKS his entry is the best and goes apeshit at a POTATO CHIP INSTAGRAM PAGE pic.twitter.com/z8JnO2nVBU

One Twitter user accused him and his friends of "bullying" the other winners, saying that Hakim deserved to win as he had the highest number of views and engagements. 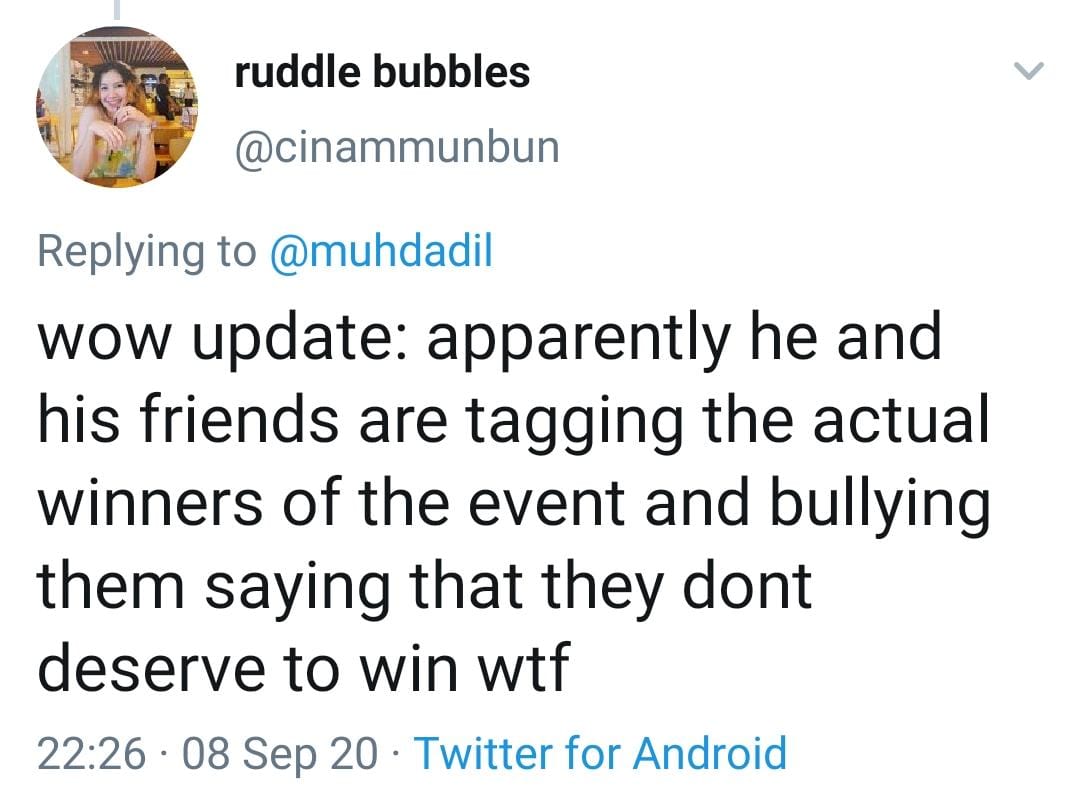 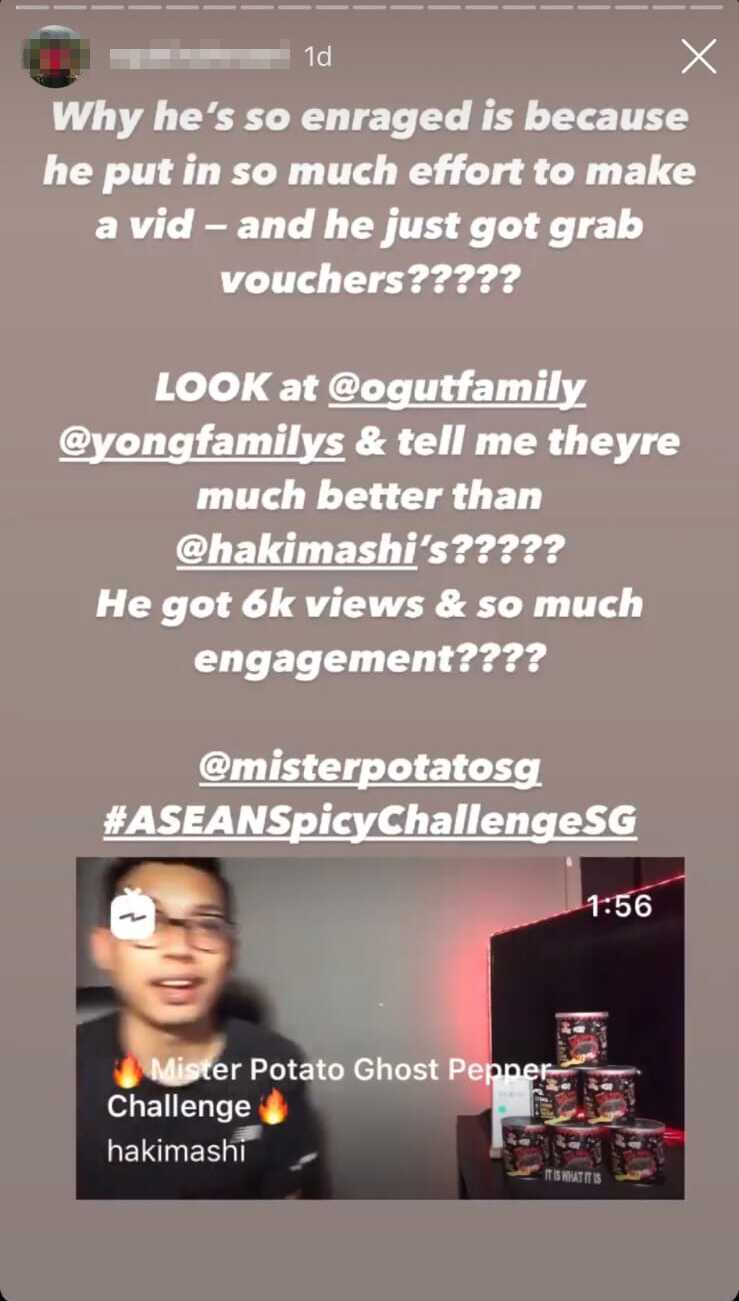 On Sep. 9, Hakim took to his Instagram again to apologise for his behaviour, explaining that he felt frustrated, but had calmed down after a day. 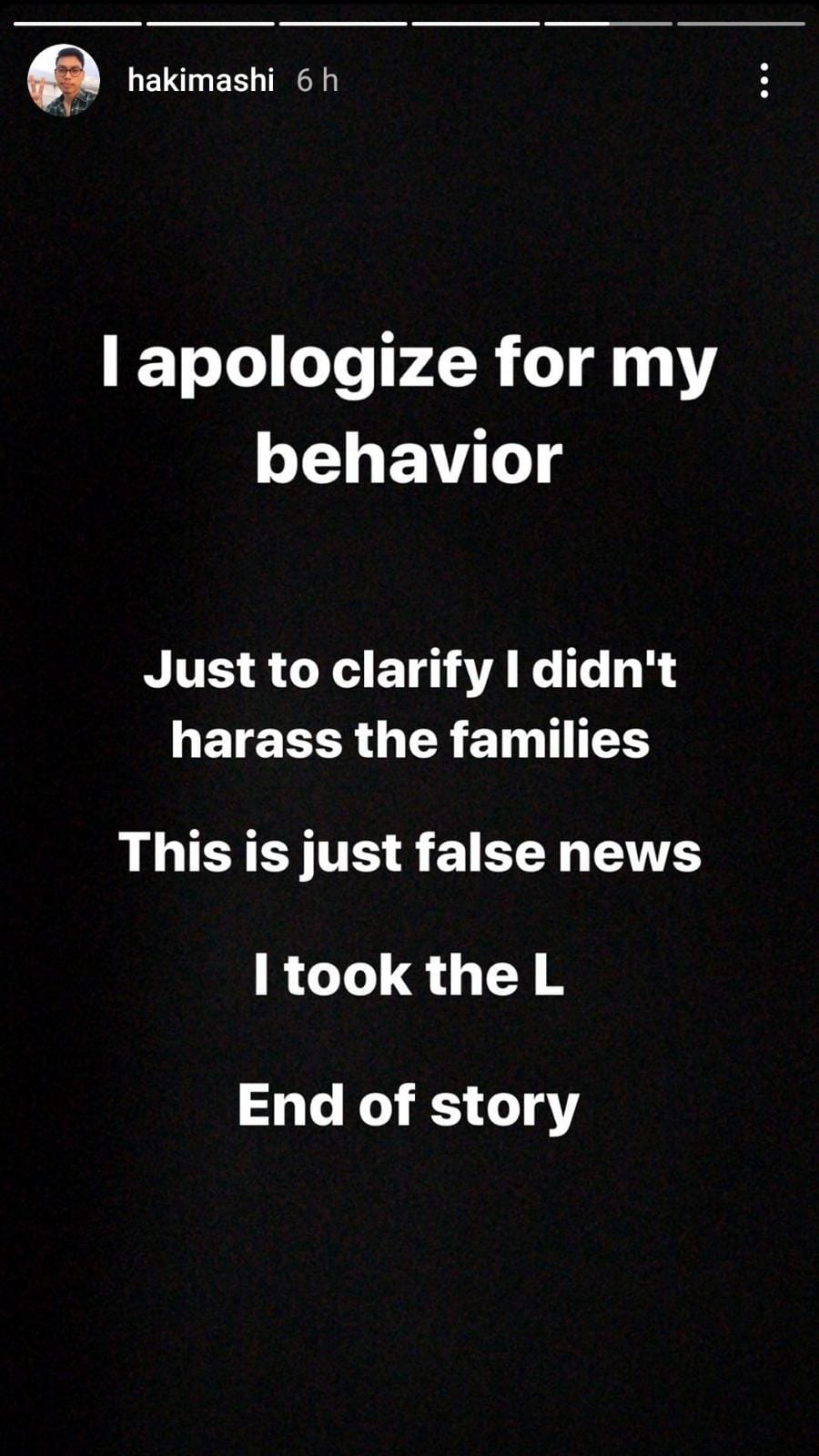 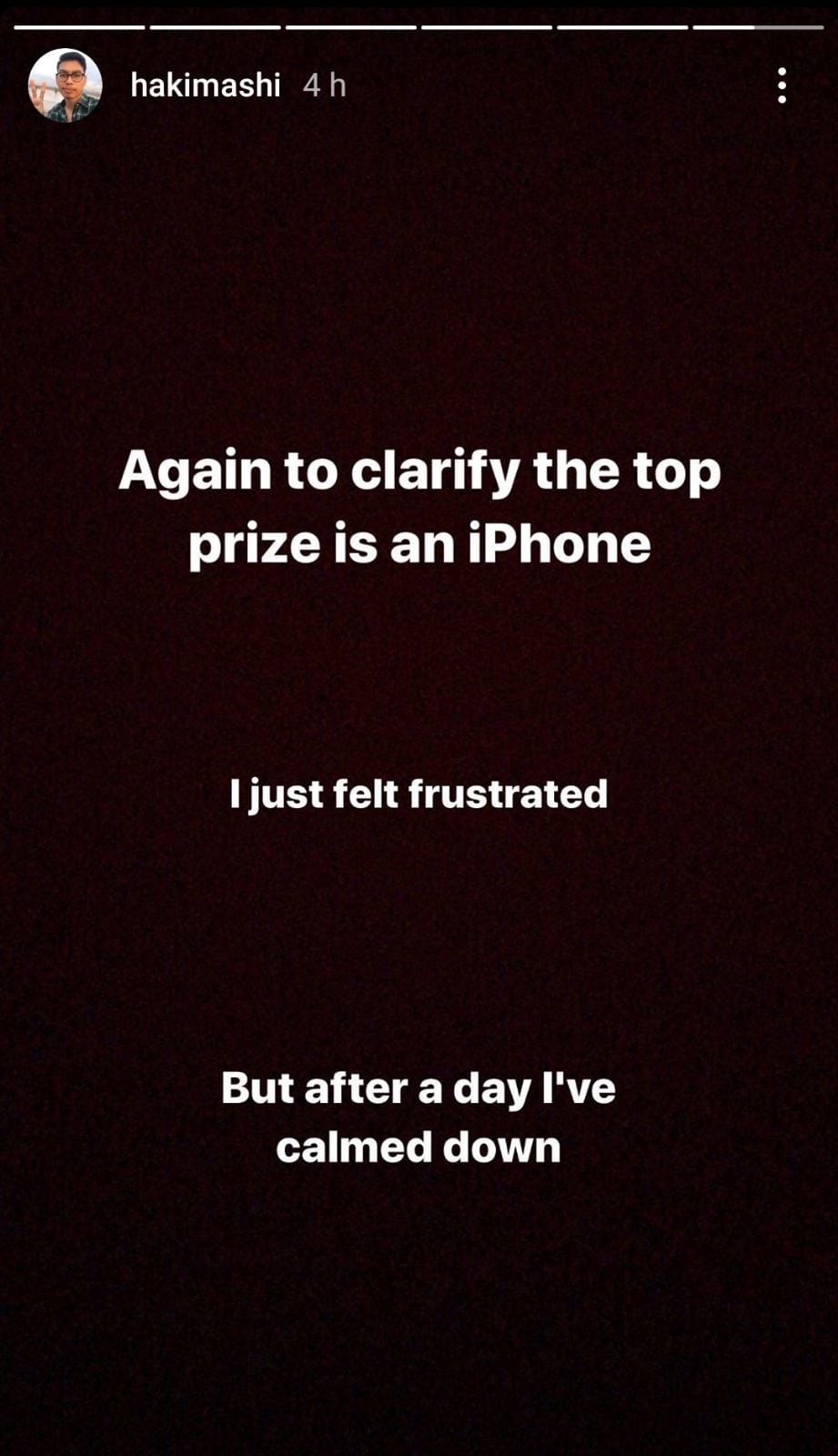