Megan Stack is an American author and journalist currently living in Singapore.

She recently penned an article for the magazine section of The New York Times about Covid-19 and Singapore:

In the piece, Stack touched on the idea of two different Singapore's, a concept many have had to confront in the prior weeks.

A good summation of her work comes at the tail-end of the piece:

"But with the distractions and rhythms of normal life suspended, the hardest truths of the city have been exposed: The unflinching approach to importing people for hard, cheap labor and the willingness to diminish individual rights in a flood of collective good."

Stack talked about the cramped dormitories, the warnings by rights groups, and the way in which people in Singapore sometimes justify the way these workers are treated:

The cheerful certainty of money flowing into that other life makes all of this degradation excusable, even beneficial. But that’s a thought exercise. The virus works in flesh and blood, and it has destroyed the fantasy of a disconnected labor pool."

The sentiment that migrant workers might have been overlooked in Singapore, or that their living conditions need to be improved, is very much an issue many Singaporeans have gotten behind.

Whether these sentiments will lead to tangible changes in the post-Covid-19 landscape is, of course, yet-to-be known.

But there have been signs that the new normal in Singapore will lead to better conditions for migrant workers in dormitories.

Manpower Minister Josephine Teo agreed that dorm standards should be raised, though she did also mention the pushback from employers.

However, some took umbrage at Stack's article.

In particular, an anecdote about her jogging session rankled.

In a nutshell, Stack decided to go for a run with her family one day.

While her husband wanted to bring along some masks, Stack waved it off, as she argued you don't need to put on a mask when you're jogging.

This ultimately led her down the route of writing an op-ed for the magazine section of NYT.

At the end of the run, she was ahead of her husband and children and stopped to wait for them.

While at the door to her courtyard, she took out a phone and checked her messages.

"A woman was using her phone to take my picture. I’ve been surveilled in Russia, China and the Middle East, but in this context — among the flower gardens of our home, on an outing with my children, at the hands of a neighbor — it filled me with rage. I raised my phone and conspicuously took her photograph in return. She didn’t like that."

This led to a back-and-forth about masks and jogging before the other woman walked away.

Stack then reflected on her "foreignness".

"I’ve been here long enough to know that Singapore would take her side, and that my obvious foreignness would only make it worse, rendering me a reckless outsider who had failed to show due deference to the system."

The latter part of the article was a bit more heavily scrutinised than the earlier parts.

More traction came after it was uploaded on Facebook.With one even taking to Medium to take apart specific lines in Stack's article, and calling the work a racist spin on what is happening in Singapore.

Another post points out constructive ways to bolster Stack's work to better reflect the nuances of Singapore, instead of some of the generalities offered in the article. The aforementioned Medium article was also mentioned. As well as a call for self-reflection.

An open letter was penned asking why a verbal spat between two condo residents had made The New York Times.

The replies to Stack's tweet of the article also pointed out issues with her anecdote, and the story at large.

Other comments that chided this particular part of her article, took aim at the lack of context, whether with regards to other countries or the pandemic the world is currently facing.

Many pointed to this article by Walter Woon, former Attorney-General of Singapore, and current David Marshall Professor of Law at the National University of Singapore, as a counterpoint.

"Some people in other countries visit beaches emptied by the lockdown. When confronted, they indignantly proclaim that they are not doing any harm since no one is around.

The reality is that they are taking advantage of other people’s sense of responsibility to indulge their selfish irresponsibility.

A clear signal must be sent that society will not tolerate selfishness masquerading as freedom. The welfare of the many outweighs the rights of an individual."

The idea of diminishing individual rights for the good of the collective might sound rather ominous, but in the context of a pandemic where staying at home is integral to curtailing the virus, it is perhaps a bit more understandable.

Also vigilantism in the form of taking pictures and posting them online in the pretext of the greater good is not really all that new to Singapore -- or even in the United States anymore.

And one could definitely argue that a pandemic is as good a reason as any to be a tad more straight-laced on the issue of masks.

One is about our reliance on foreign labour, and what responsibility that reliance entails.

Which is a crucial conversation, and one that Singaporeans will hopefully engage in over the long run.

The other part of her article, which drew brickbats, had a noticeable shift in tone:

Which was noticed by others: 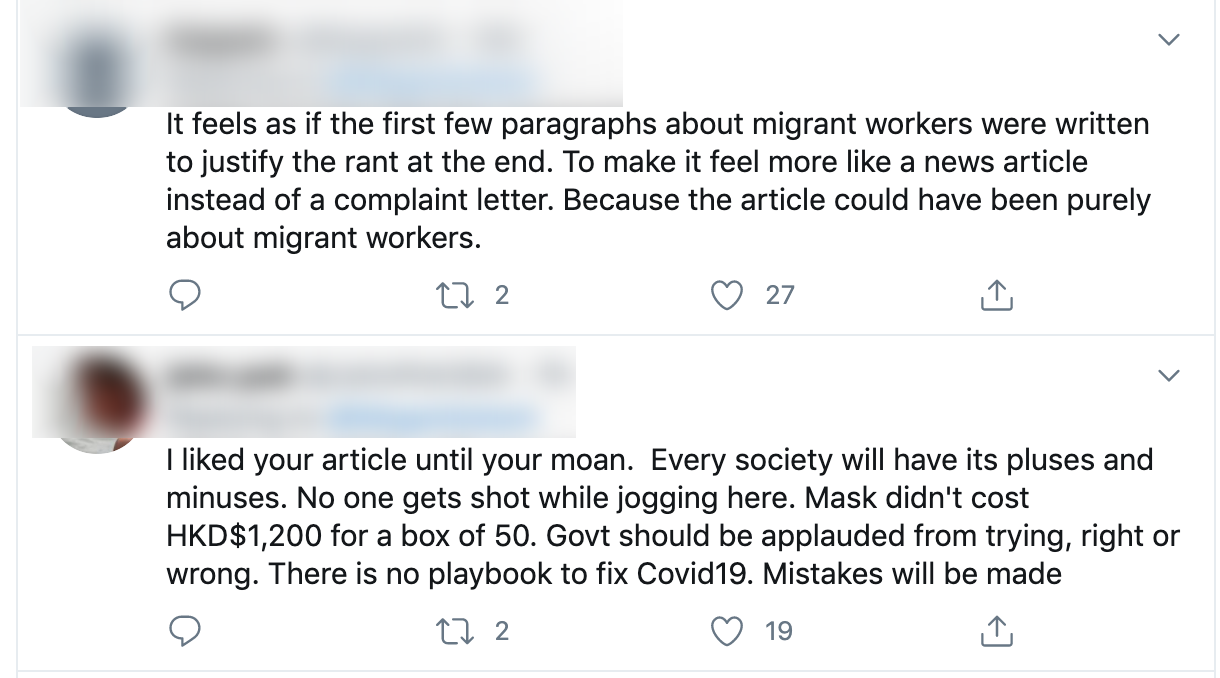 Here was how she appears to have couched that particular anecdote: "... the willingness to diminish individual rights in a flood of collective good."

Throughout the article, Stack presented Singapore as a country that is great, as long as you toe the line, which is a fairly popular caricature of Singapore.

"I understood that if we followed the law, kept out of local affairs and lived as a benign foreign family on an employment pass (not to be confused with a work permit, like the ones held by the migrants in the overcrowded dorms), we would be allowed to make a home in this comfortable and often spectacular city."

For two years, Stack appeared to have toed that line well.

She then talked a bit about the civil liberties that Singaporeans have traded away in lieu of security.

"But living here entails a stark trade-off when it comes to basic rights and civil liberties. Freedoms of speech and press are curtailed. Gay sex is illegal. Drug dealers are executed by hanging at dawn. Vandalism and groping are punishable by caning. People are filmed constantly by an army of surveillance cameras. Communications can be monitored without a warrant."

The rapid-fire listing of these civil liberty issues provide little nuance into how they came to be, and how to change them. As well as lacking context to show the severity of these afflictions.

The Singapore that Stack has described is more or less a familiar one. Basically act blur, live longer.

Which begs the question, what has changed? Why speak up now?

Why are all these things that were present in Singapore throughout Stack's two years here suddenly issues worth dissecting? What caused this Omelas-ian level turnaround from general apathy?

One of her final paragraphs might provide the key to understanding this entire thing.

"I have lost the impassive perspective of an outsider. I’m a neighbour who might catch the virus or infect others; a person who has been sheltered by the state and ensnared by its rules; a resident who should ask after the fate of the sick men who build this city and whether their living conditions will finally, now, be improved."

Some could take that sentence as an almost metaphorical dive into Stack becoming more Singaporean.

That perhaps Stack has converted from an outsider to an insider.

So, if Stack claims to feel the same things and to finally be able to breathe the same air as Singaporeans after living in Singapore for quite a substantial amount of time, perhaps the next step should not be asking the world, "Why does it smell like this?", but instead, "What took me so long to smell this?"

You can read her full article here.

Image from NYT FB and Getty