There has been some angst over Singapore's wildlife recently, in particular, the otters.

Debate over managing the local otter population started when former Mediacorp actress Jazreel Low revealed that a family of otters had snacked on the fishes she kept at her spa near Bishan Park.

Low's arowana, as well as other prized fishes, were not spared.

The incident drew mixed reactions, with some labelling otters as "pests", and stating that the population was too large.

This sentiment was followed up with calls to cull the otters to manage their population.

It even sparked a controversial forum letter by one Ong Junkai, which was published in The Straits Times.

Ong argued that otters "do not belong in urban environments", and even suggested that otter watch groups use deterrents, such as rubber bullets and air horns, to prevent them from entering urban areas.

The letter has since received some backlash from Singapore's nature-loving community.

Here are some reactions: 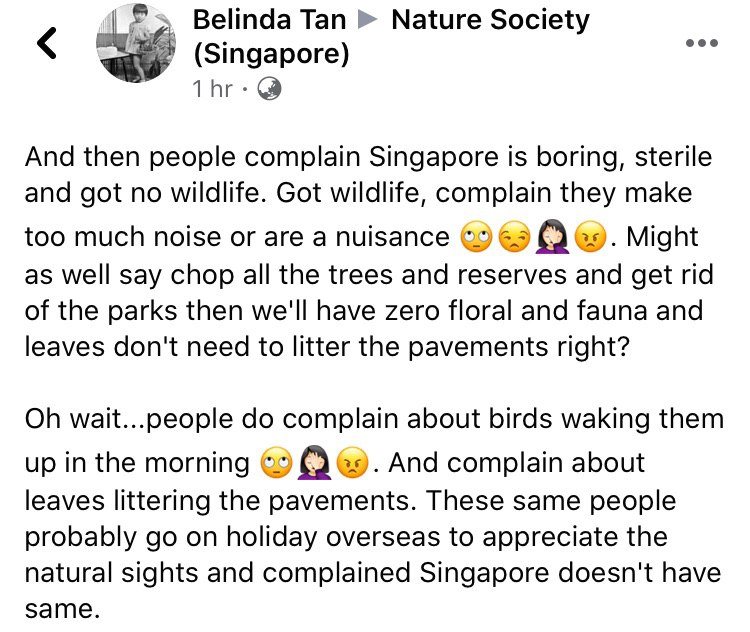 In a recent post by local otter watch goup Ottercity, it seems Low has responded to the issue as well.

And Low apparently disagrees with the idea of culling the otters.

She had apparently said:

"I don’t believe that culling is the way to go. Killing the otters won’t bring back the fishes. We’re located in one of their habitats, and we should learn how to co-exist with the otters instead of resorting to drastic measures such as culling them.”

In their post, Ottercity also shared a glimpse of what truly goes on when sightings of otters in urban areas are reported.

To clear the air over Ong's implied message that Ottercity might not be doing enough, the group shared that whenever there was an instance of human-otter conflict, the Otter Working Group (OWG) comprising individuals from agencies with a variety of acronyms, such as NParks, PUB, ACRES and NUS, would be activated.

People who track the otters on the ground are then notified so as to identify which otter family it is and how they entered the premises.

Evidence is then collected so the OWG can devise a plan to usher the otters out.

One successful intervention was when otters found their way into a condominium near Punggol River. After locating the condo's entry and exit points, the OWG advised the management to fence up the perimeter.

Fences were installed and no more otters were seen inside.

The OWG also distributes educational materials to inform residents in the vicinity of the otters' presence.

However, the OWG members are only human, and are not always on hand to ward off otters from entering private property:

"So if this all works, why are otters still entering private ponds? Well, their 4 paws go much further and faster than our two feet. Our trackers simply can’t catch up all the time. And exploring is a natural survival trait - problem is, this is happening in one of the world’s most densely populated countries. We already pick up carcasses of roadkill."

Ottercity said that they sympathise with pet owners who have lost their fish to otters.

Nevertheless, they urged Singaporeans to have more compassion as the otters are merely acting on their survival instincts.

The critters are also considered rare, so much so that otter lovers from foreign countries have visited Singapore hoping to catch a glimpse of them.

They also assured that otters were not overrunning Singapore, as opposed to what some might believe from the frequent encounters in urban areas.

"For cases in the news recently, our tracking showed it to be just one family, named Zouk, appearing in Little India, KK Hospital and Bishan Park. So fear not, Singapore is not being overrun by hordes of otters - we only have 90+."