I was warmly invited to visit the humble home of Mohamed Iskandar Misran and his wife Nuraziana Mohamed Said on a weekday night.

They enjoy making music together, are avid foodies and most importantly, they enjoy each other's company.

However, unlike a lot of Singaporean couples, another trait they share is that they are both legally blind. 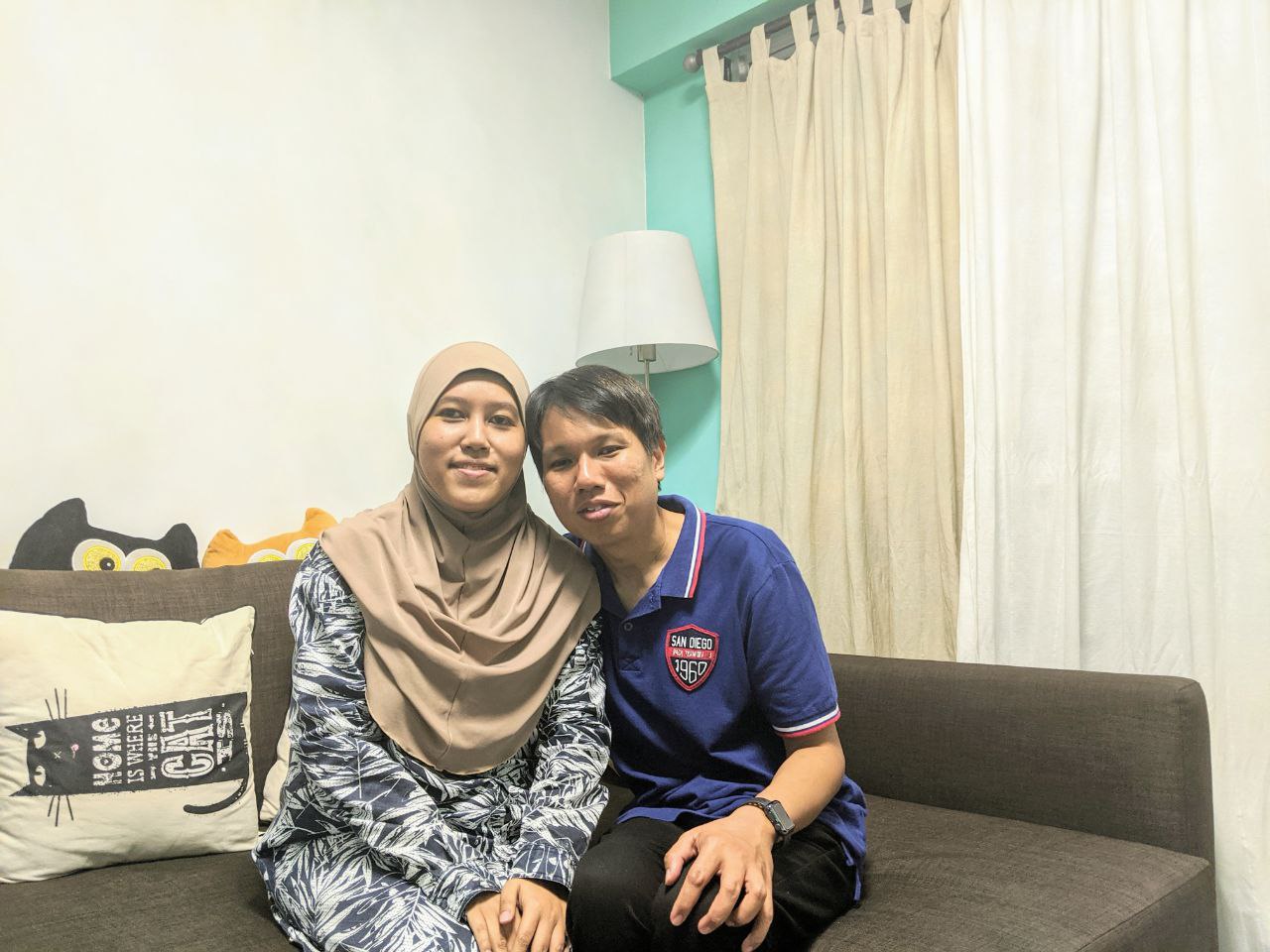 Like most kids, their childhood was filled with outdoor activities like cycling and playing soccer with their peers.

But as their vision began to give way, they distanced themselves from other children, both in school and at the playground.

For Iskandar, he began to knock into things more often as his eyesight deteriorated.

Ziana, on the other hand, would unintentionally skip lines while reading passages for her oral examination.

At 10 years old, he was diagnosed with retinitis pigmentosa, a degenerative genetic disorder that gradually affects his vision.

Meanwhile, she was only nine years old when she was diagnosed with glaucoma, a condition that damages one's optic nerve.

Because of their condition, they had to leave their mainstream schools and enrolled in the School for the Visually Handicapped (SVH), now known as Lighthouse School.

Interestingly, they shared that they never questioned or mulled over their visual impairment.

They reasoned that since they were still kids then, they adapted to their surroundings faster.

In fact, they felt grateful to be able to continue their studies with people of similar circumstances.

"When I met my friends (in school), some of them were in a worse situation than I was. I felt very grateful for what I have and what we can do to support each other."

That school also happened to be the place where they both met when he was 14 while she was 10.

Their friendship, however, didn't start off on the right foot.

Laughing as he reminisced their childish competitiveness, he shared: "We were very competitive then. I used to always come first in class, but she took over the position when she came. Me and my friend were wondering who is this new girl?"

Eventually, the two of them became good friends, but lost contact for a while when Ziana advanced to Ahmad Ibrahim Secondary School while Iskandar couldn't attend school for a couple of years due to his health issues.

He said: "By the time I got into secondary school, I was 20 years old and Ziana was already my senior in secondary four. Luckily I was still quite small-sized then."

Once a year phone call

But they weren't completely estranged.

At least once a year, he would call her and they would talk for hours on end.

"We talk about anything and everything under the sun. For some reason, I can talk to him more than I can to other people."

However, every time she tried to call him back the following day, she would find that Iskandar had already changed his number.

Puzzled by his number-changing habit, I asked him why he went through such lengths every year.

Turns out, he has always held a candle for her.

"Love is blind, we are also blind so I didn't know that I was falling in love with her since we were schooling together. But she kept rejecting me..."

To this, Ziana quickly quipped: "Of course, lah! Later my mother scold me how?"

He knew that if they continued to contact each other, his feelings for her would grow and he couldn't take another rejection.

Unfortunately, he couldn't give a surprise call to her anymore after a few years as she changed her phone number when she moved houses.

But fate has a funny way of coming around.

Almost a decade later in Dec. 2010, Iskandar thought he was meeting a mutual friend to buy health supplements.

However, he didn't know that this friend had also organised a reunion with their other SVH peers, including Ziana.

"When I found out that she was going to be there, I said alamak.... I want to go home. But this friend convinced me to stay because they were already there."

At the reunion, they exchanged phone numbers again and as usual, he was ready to change his phone number again.

Just as he was about to step into a telco store, he received a message from Ziana that said: "Don't go missing anymore. Can we talk during the weekend?"

While he agreed to stay in contact, he called her the following day as he simply couldn't wait for the weekend.

"I was so touched when she sent me the message. That night, we clicked instantly and talked from 11pm all the way to 3am."

The couple got engaged three months later and were married in 2012.

Iskandar and Ziana have been living independently in their BTO flat for a few years now.

They would do their household chores together and Ziana has even learnt how to cook for the both of them.

But getting to that stage was another challenge, especially when both their parents are protective of them.

As the only girl in the family, her parents were worried for her and tried to convince the couple to continue living with them.

However, Ziana stood her ground.

"We have to start somewhere. Parents will love you forever. But they can't be there for you forever. If we're not sure of anything while living independently, we can still ask them now. But if we wait until the end when our parents have to leave us behind, it will be a little too late to learn (to be independent)."

Eventually, they received their parents blessings and are very proud of their achievements: "They used to come visit everyday, but now they only come once a week. They are always proud to tell other people that we can take care of ourselves and have our own house.

Performing with the band

When I asked what life would be like without one another, the question was met with a pregnant pause followed by a burst of laughter from the both of them.

While he only has less than eight per cent of his sight and she has about 40 per cent, they can only see a future with one another.

"I cannot imagine life without him. We do everything together," said Ziana.

And she really meant it when she said "everything".

Every weekday, Iskandar would send his management executive wife to her office at Raffles Place at 8am before he starts his job as a massage therapist at 10:30am.

After knocking off from work, he would fetch her from the office and they will have dinner together before going home.

In her defence, Ziana said that she can travel to work on her own, but it puts her husband's heart at ease to make sure she is safe at all times.

"Maybe I'm a bit protective... It's my responsibility to take care of her."

Over the weekend, they also keep themselves occupied by jamming with SeeSaw, a band they formed with their visually impaired friends.

While Ziana takes on the role of the band's lead singer, Iskandar plays the bass.

Occasionally, they also have gigs with the band, like this one they recently did at Republic Polytechnic.

Even after years together, the two of remain in awe of one another's personality and achievements.

Gushing about his wife, Iskandar shared that she motivates him to always expand his skill sets.

Especially since Ziana managed to earn herself a degree in Malay Language and Literature from the Singapore University of Social Sciences after failing her O Level English Language examinations thrice.

"When I met her and found out she was still studying, I was very impressed and it encouraged me to go for further studies. Even now, I'm thinking of getting a service excellence certification."

As for Ziana, being with Iskandar has made her more courageous.

Just three days into their marriage, they travelled alone to Genting Highlands -- something she has never done without her parents by her side.

This, however, was almost like a piece a cake for her adventurous husband who has also hiked Mount Kinabalu before they were married.

"I have always been focused on my future but when I got to know him again, I felt very inspired because he proved to me that academic achievements are not everything. As long as you are positive and hardworking, nothing is impossible."

"It's not a problem, it's a challenge"

I couldn't help but to imagine the struggles a visually impaired person would face on a day-to-day basis and whether they have been ill-treated by people on the street.

But Ziana casually said that being visually impaired is a blessing in disguise: "The thing is, even if people give us a stink eye, we cannot see. So I will just continue living in my own world."

However, they both stressed that they meet more kind people than nasty ones.

"Everyday people approach us to try to help. Even young kids will want to walk with us. Singaporeans are nice, actually."

If I learnt anything from the couple that night, it is to always see the glass as half full, not half empty.

And as Iskandar puts it: "Being visually handicapped... It's not a problem, it's a challenge. If you face a challenge positively, it shouldn't be a problem. Surely, there will always be a way to go through the hurdle."