On Oct. 1, China will have a military parade to celebrate the 70th anniversary of the Chinese Community Party taking power.

And there has been some excitement over the People's Liberation Army (PLA) Women's Honour Guard, a non-combat unit that is mobilised during parades and ceremonies.

To be even more specific, the buzz revolves around one particular soldier – 27-year-old Men Jiahui.

Men first skyrocketed to fame in 2015 because of a video of her marching at the Victory Day parade in Tiananmen Square.

The ceremony marked the 70th anniversary of Japan's surrender at World War II.

A 12-second clip uploaded by People's Daily on douyin (TikTok), involving her performing in front of other PLA soldiers, reportedly received over 3.5 million views, according to MSN. 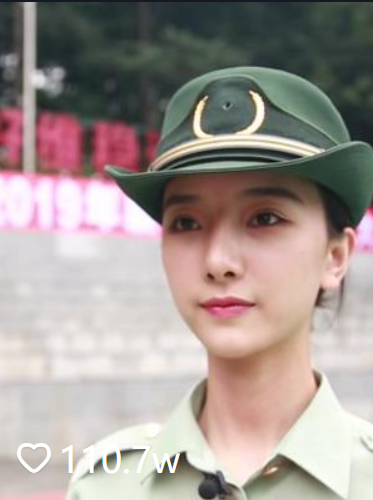 Many people on the internet pointed out her good looks in response to the video.

The 27-year-old also apparently got so much attention that she was subsequently dubbed "China's most beautiful soldier".

And here are pictures of her not in uniform:

According to Next Shark, Men was born in Dalian and majored in modelling at the Beijing Institute of Fashion Technology.

In 2014, however, she made a career switch, joining the PLA after previously working as a model.

She said that she dreamt about being a soldier when she was a child, and decided to join the army after learning that the PLA was starting to accept female applicants.

While the career switch may come as a surprise to some, Men said that being a guard of honour and model have its similarities because both jobs involve presenting yourself in front of other people.

She also admits that being a guard of honour has its challenges and her life has "changed a lot since".

However, she reportedly adds that she does not regret her decision.