A total of 24 golden flags were removed as quietly as they were put up at Block 108 Jalan Rajah.

The artist responsible is Priyageetha Dia, who was behind a gold foil-covered flight of stairs in another HDB block in Jalan Rajah a year ago.

Her second shot at doing art by embellishing an aspect of public space involved putting up golden mylar blankets where National Day flags would hang outside the corridor in August each year.

The flags were hung on Sunday, March 18.

Priya, a former Lasalle College of the Arts student, said the flags were supposed to draw attention to something that is often seen to be ordinary and overlooked.

The Jalan Besar Town Council removed the flags without fanfare on March 21, after a complaint was made that the golden blankets looked like joss paper.

The 26-year-old artist herself said she was not surprised that they were taken down.

What has the art work achieved? Putting up golden blankets without permission purportedly for highfalutin ideas does open up the discussion of artistic merit and boundaries -- with limitations.

In the process of negotiating where art can exist in public spaces, it renders the art bigger than the physical space itself.

1. Putting up art without permission is subversive and is part of the art

2. The reaction of the general public and authorities to the art work becomes part of the art

3. The lack of sanctions -- formal and informal -- by the authorities is part of the art

4. The media mentions of the work is part of the art

5. The public's lack of interest in the discussion is part of the art

6. The ephemeral aspect of the event is part of the art

7. The obscurantist nature of the art is part of the art

Not all Singaporeans share the same neutral sentiment or cerebral understanding:

Some pointed out that the subjectivity of the work means that not everyone appreciates it:

Lily Neo, MP for Jalan Besar, said: "HDB block is a common space shared by people with different views about what art is, especially when it comes to cultural sensitivities".

"In the future, we hope to work with Ms Dia to find a suitable place to exhibit her art whenever she has something new planned."

She also said that there are different places where her art can be shown, such as wall murals, "which may be more suitable". 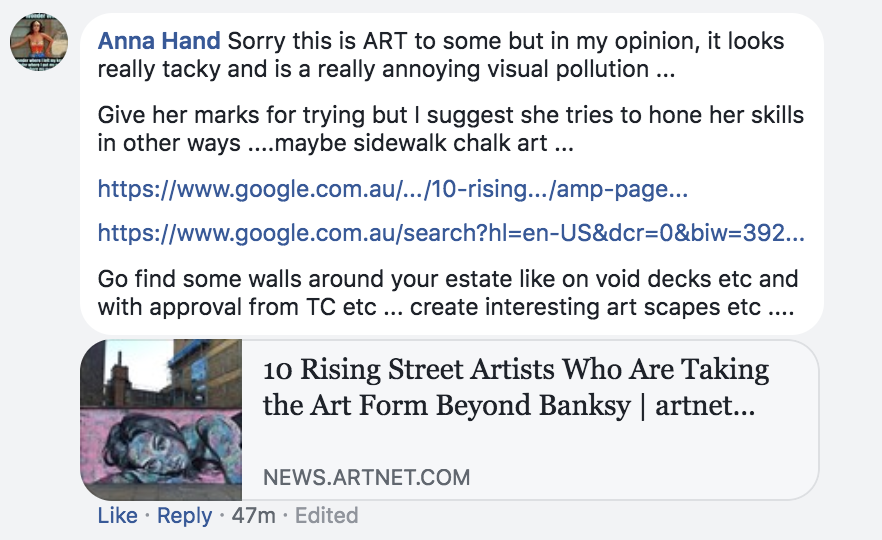 Priya herself has said that she is keen to work with the Town Council on future projects.

However, acquiescence to the status quo rules will render her art less potent, or impotent, redundant even.

Once it's boxed into some form of regulated space, for visitors to appreciate the work under some conditions, it will fail to achieve the original intention of looking towards the ordinary spaces we live in as there is no longer the element of surprise.

What constitutes the right space for Priya's work will still be subject to scrutiny and debate in the near future.