And just when that is dwindling down, another kind of scam surfaces — and this one's even more personal:

This guy will pm you and ask you to “help” him cos he’s stuck in a situation & he’ll give you $$$ up to 1k for helping. He’ll ask you to sign up contracts @ telcos and then get you to pass the phones to him & you’ll be left with the bills. RT TO SPREAD AWARENESS pic.twitter.com/TfWWCHQyrN

There seem to be a few variations of this scam, but they all chiefly involve getting victims to sign up with telcos for phone lines and pass on the phones that come with them, in exchange for money and the promise of the transference of ownership of the line.

This never comes to pass, however, and the victim ends up stuck with massive phone bills with the scammer going MIA.

But the story we're telling you about here centres on one individual scammer in particular, so sit tight.

According to various accounts from multiple victims Mothership has heard, the scammer, who goes by the name Faris, allegedly added people on Facebook as friends randomly, and then requested their phone numbers so he could talk to them on WhatsApp — likely for a semblance of sincerity and a more personal touch.

If they refuse to provide their numbers, Faris messages them on Facebook. But whichever way he speaks to them, the request is always the same: seeking their help with signing up for a new telco contract.

Faris says different things to different people to explain why he needs help with this — these include him claiming (quite irrelevantly, actually) that he is using a prepaid SIM card: 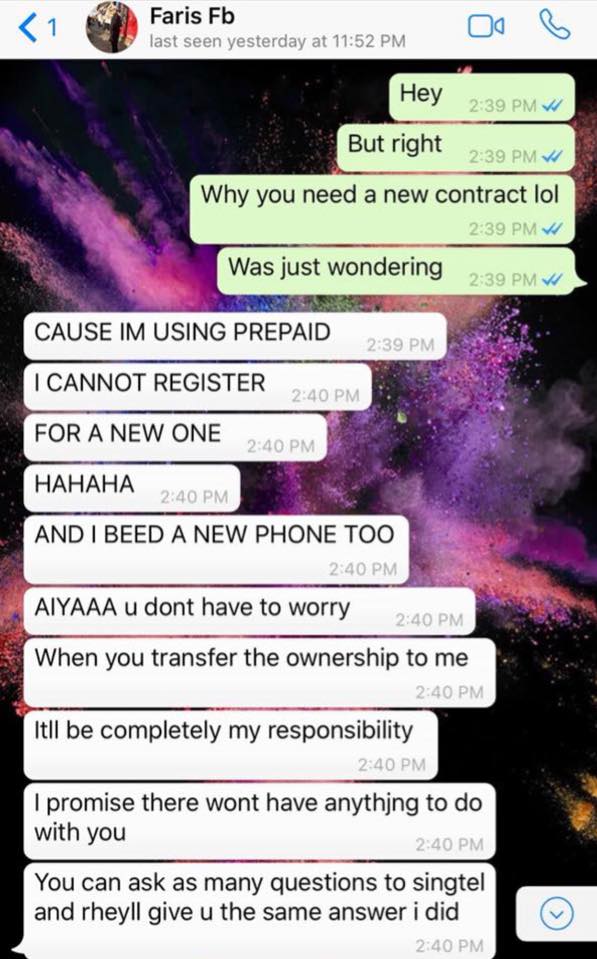 and also promising cash in exchange for helping him out: 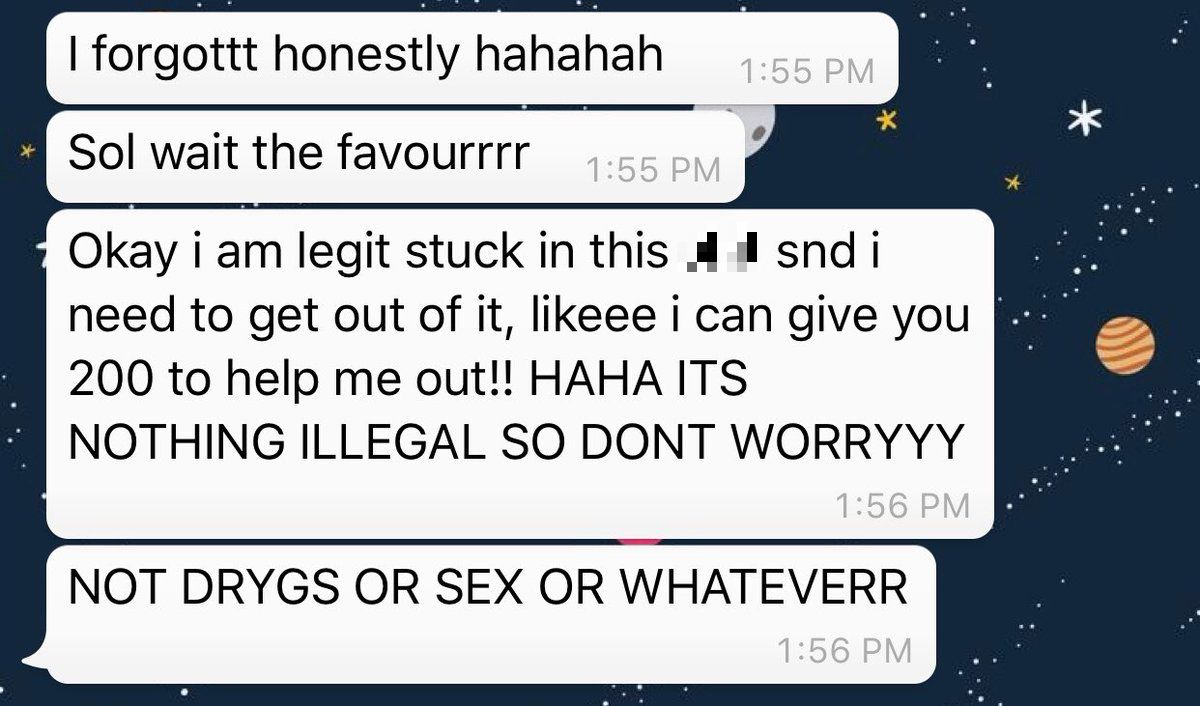 A friend of one of Faris's alleged victims set up a Twitter account, @farisscammer, to publish information exposing him and his modus operandi to warn others against falling for his tricks.

2. Asks victim to sign up for highest tier contract

Speaking to Mothership, the user said from what he observed, the victims are told to sign up for the most expensive contract available so that they won't be required to pay any money upfront.

The monthly subscription fees for these contracts range between S$118 and S$239.90.

After convincing them to do this, he promises them that they will be able to subsequently transfer the ownership of the phone contract to him, also repeatedly claiming that whatever they'll be doing for him is not illegal.

3. Meets up with victim to take new handset, then discards contracts and receipts

Once the victims are convinced to sign the contract, Faris will then meet them in person, whereupon they will hand over the phone to him.

After removing the phone, charger and earpiece from its packaging, he then allegedly places the contracts and receipts into the box and throws them all away, telling his victims they "won't need them".

Faris then allegedly tells the victims to hold on to all the bills until the ownership transfer is completed, because "everything is online nowadays".

Can transfer of ownership really be done online?

Transfer of ownership, as the term suggests, is the handing over of the telco services and charges from one party to another.

A quick check on the three major telco services in Singapore shows that transfers of ownership at StarHub and M1 require both parties to go to a physical store to be done.

Singtel, however, does allow the process to be done electronically, just as long as both parties have a OnePass account.

But that's not the end.

As soon as Faris receives the phone, he promises to transfer the money to the victim later on.

He allegedly never does.

With one victim, for instance, he sent hostile and condescending messages in response to questions from her about when he will execute the transfer of ownership: 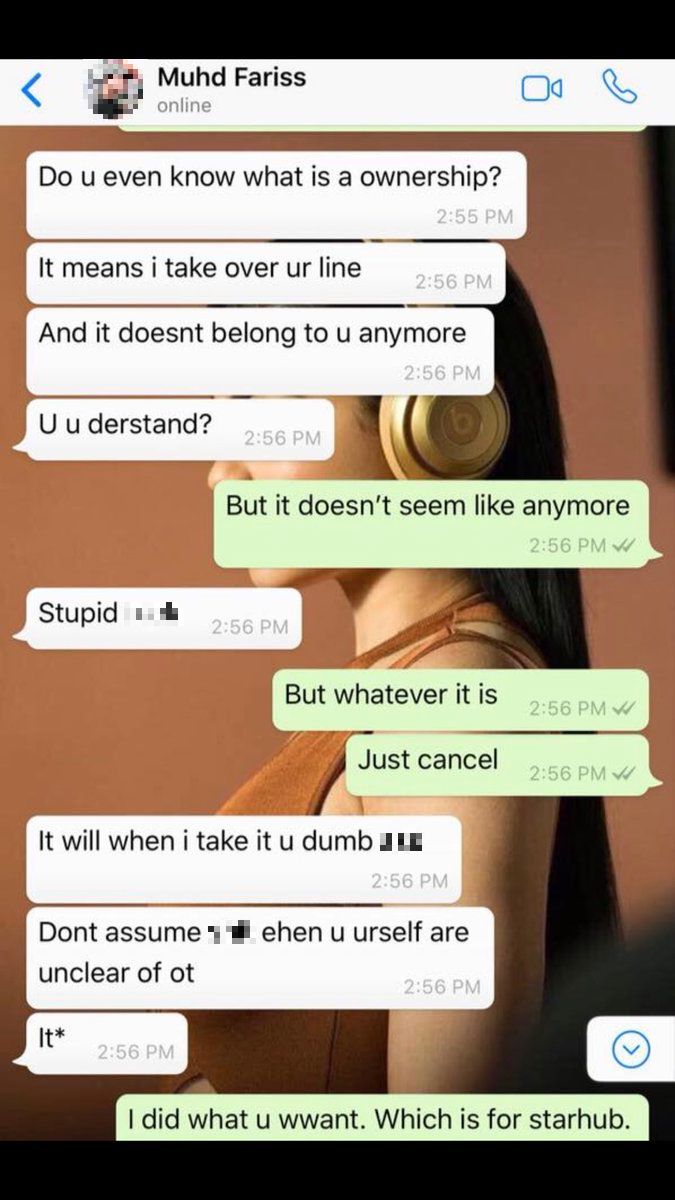 And here's a lengthy and threatening text from him when another victim asked him to pay the incurred bill: 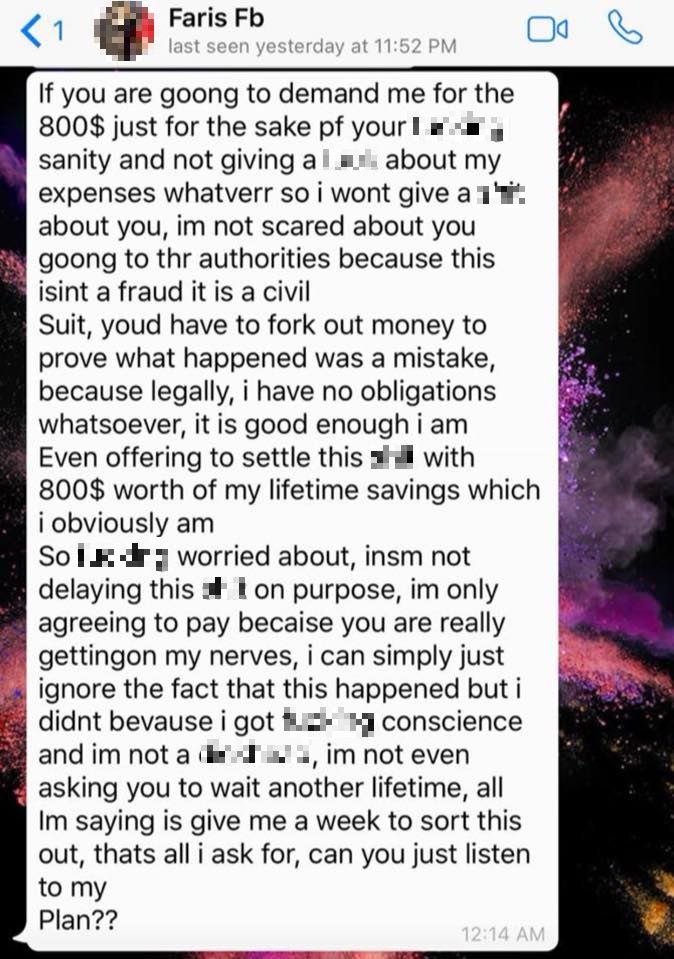 However, according to the victims, Faris would allegedly eventually cut all forms of contact by blocking them off WhatsApp and the social media platforms he used to speak to them.

So all Faris had to do was go uncontactable, in order to leave his victims stranded with accumulating (and massive, might we add) bills.

His victims are therefore left with two options: 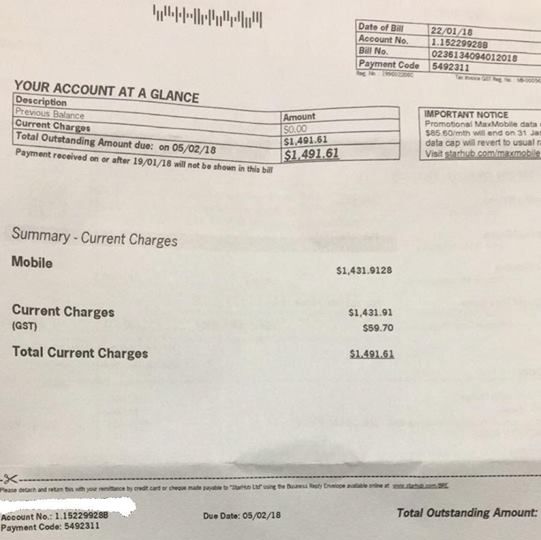 Faris's "mother" appeals for posts to be taken down

Since then, several viral posts about Faris were circulating on Facebook, exposing his telco scamming escapades. These revealed information that included his age, the fact that he is in National Service and even the residential estate he lives in.

As the Facebook posts garnered more and more shares, a Facebook user identifying as Faris's "mother" wrote to the authors of the posts asking them to take them down, even providing a phone number to call to settle outstanding payments. 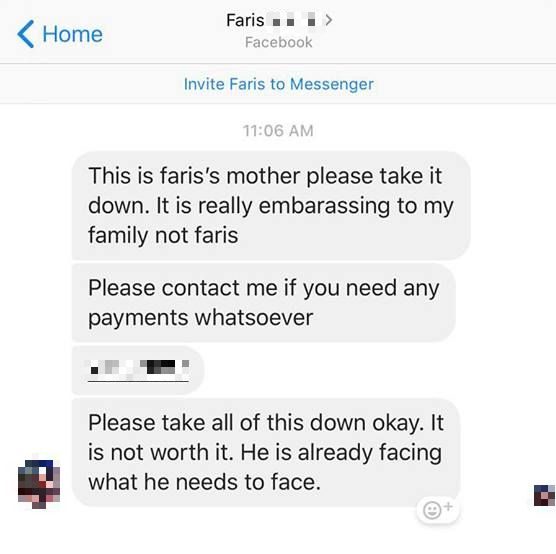 Interestingly, as one of these message recipients would later discover, the number provided by the "mother" shows Faris's face in its WhatsApp picture: 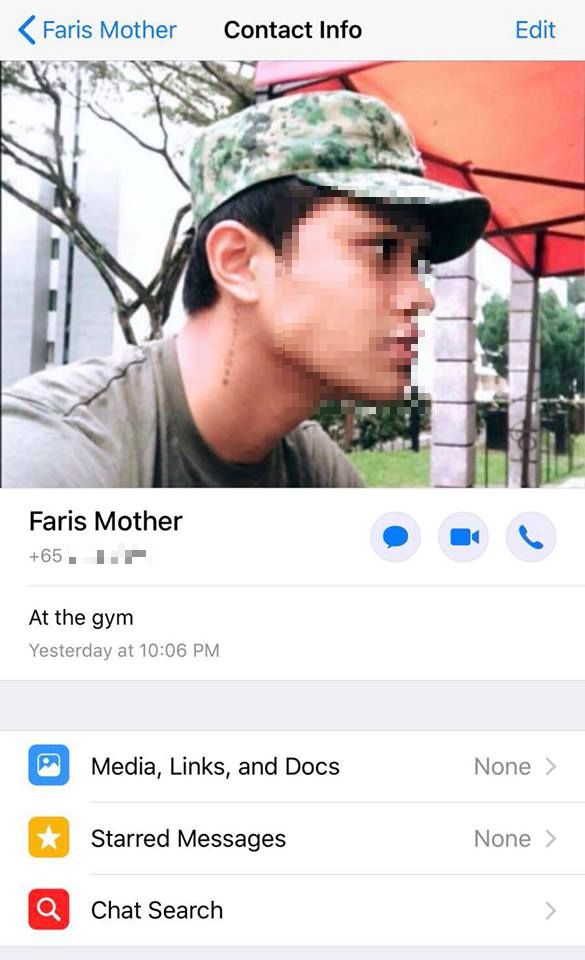 "I'm 23, travelled the f*****g globe more than all you stupid f***s can afford, hate me all you want, socially defame me all you want, claim I took your s**t, lmao, bunch of c***s who sadly, under developed brains to understand the concept of patience. What a crew of dumb uneducated f***s. I honestly take no effect, but trust me, 400 shares, isint gonna make me flinch b***h. I'm stronger than what you think, I give no f***s, as they say, a man for his own, lmao. Cut the sob story s**t, you got duped, you're stupid as f**k. Admit that s**t and move the f**k on. After all, who doesnt wanna earn that s**t. Lmao. #merrychristmas"

Apparently, his modus operandi has been around and also practised by other scammers for awhile:

One Twitter user even mentioned its similarity to listings on Carousell that are commonly referred to as "fast cash (above) 18":

Simi fast cash 18^? Here's what they often entail — this one, for instance, claims to offer up to S$5,000 just for signing up for telco lines: 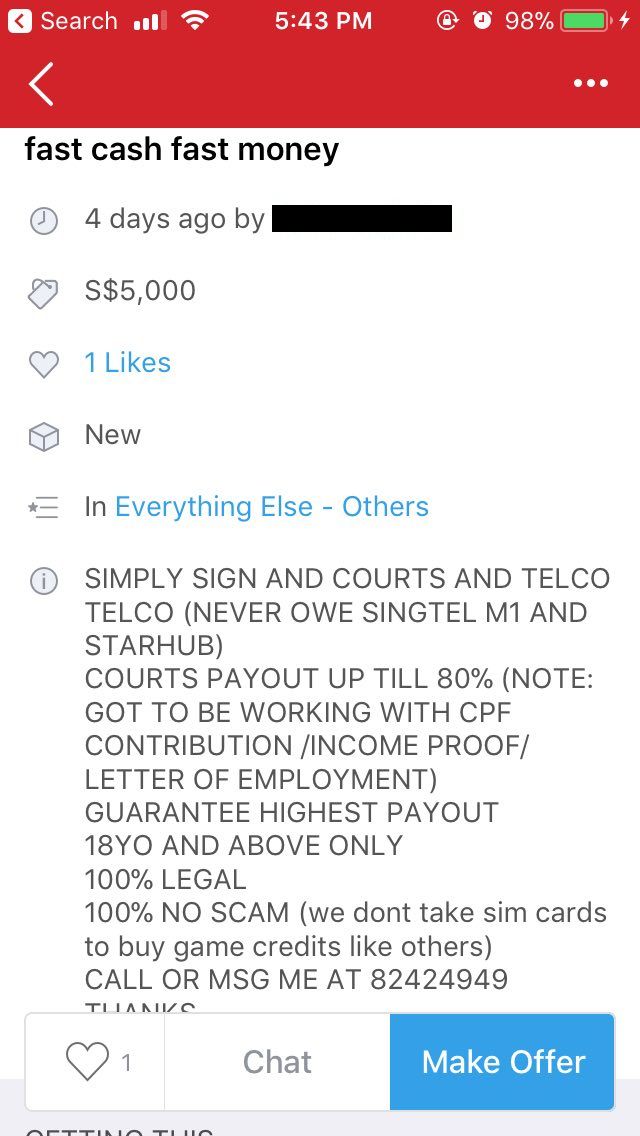 We tried messaging one of the Carousell accounts from the job listing, and from the "seller"'s message, it again looks all too familiar: 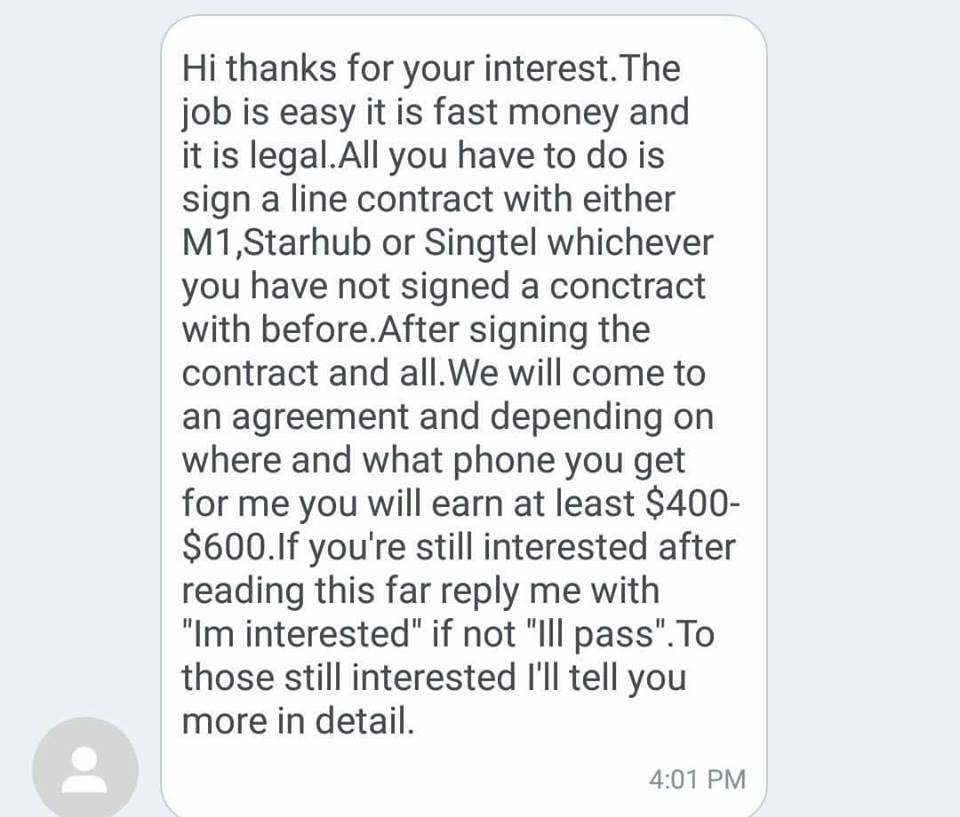 Is it really legal?

One of the victims, we're told, went to a lawyer, and was told this is a civil case.

A civil case is a lawsuit between two individuals — i.e. not a case prosecuted by the state — and the lawyer, it seems, won't be able to act unless the telco is chasing the victim for payment.

However, according to a recent Straits Times report, four people have been arrested for scams sounding very similar to what Faris allegedly did. One of them will be charged in court with the offence of cheating.

At least one of Faris's alleged victims have filed a police report.

We have reached out to the Singapore Police Force who confirmed that "a report was lodged", but did not mentioned whether this case is being investigated.

Top image via Carousell and @farisscammer