The National Council of Churches Singapore (NCCS) said on Tuesday, March 14, that the inclusion of a "gay moment" in Disney's live-action remake of Beauty And The Beast is "totally unnecessary".

NCCS issued a letter to pastors and church leaders ahead of the film's opening in Singapore cinemas on Thursday.

NCSS said the character named LeFou, a sidekick to antagonist Gaston in the movie, "signals a marked departure from the original 1991 classic", which was previously an animation.

NCCS noted this is the first time an explicitly gay character is introduced in a Disney big-screen production.

"Some Christian leaders here are deeply concerned about the LGBT representation in this new Disney movie. They see this as an attempt to influence young children and socialise them at an early age into thinking that the homosexual lifestyle is normal."

Parents, especially, are to be alerted to exercise discretion in guiding young children to view this movie, the council urged pastors and church leaders in guiding their congregation.

"We would like our parents to be aware of this strand in the movie and its possible influence on their children who watch it, however subtle," NCCS added.

The Roman Catholic Church of Singapore also issued a separate statement to parents:

“Disney’s remake of Beauty And The Beast has been given a PG rating in Singapore. With extensive media reports of the purported ‘gay moment’ in this movie, we believe that parents must discern and reflect with their children on whether the lifestyle portrayed is consonant with the teaching of Christ. They must explain the implications and the consequences of such a lifestyle for themselves and society.”

The statement is attributed to the Roman Catholic Archdiocese of Singapore.

The movie has been passed clean by Singapore censors, but was given a PG rating for "some intense sequences" depicting moderate violence.

Spoiler alert: Turn your phone upside down to read all about the LeFou gay moments that transpired in Beauty And The Beast: 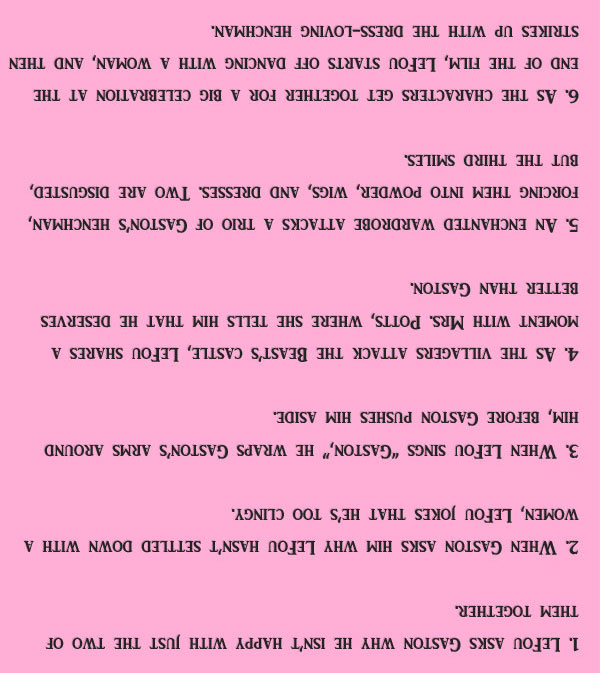