Animal lovers and keyboard warriors all around Singapore were p*** off at a woman who supposedly said "F*** you. It’s only a dog" after hitting a dog and driving off. The dog was being taken care of by the Animal Lovers League (ALL).

Some even went to check the car's registration plate and traced the name of the owner of the car.

After the name of the car owner was splashed across the Internet, other Internet vigilantes pointed out that the car owner supposedly works for Huttons Asia, a real estate agency.

This led to viral articles painting the car owner as the one who hit the dog, such as this article with over 4,000 shares: 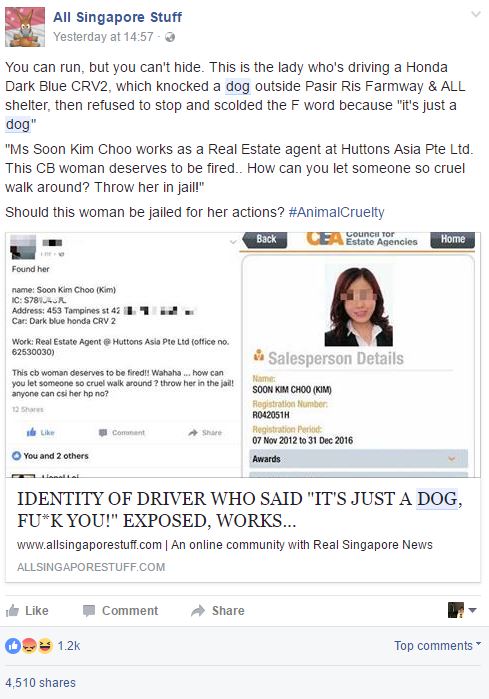 All this while, nobody stopped to wonder if someone else could have been driving the car at the time instead.

The Animal Lovers League, after meeting with the management of Huttons Asia, said in a Facebook update that there were two police reports lodged in relation to this case.

They also shared that the driver who hit the dog "is not an agent or employee of Huttons."

It is not known whether Huttons Asia or the car owner is considering legal action against those who erroneously pinned blame.