Dr Lee Wei Ling earlier today (Aug 14) posted on her Facebook page regarding the impending bill on laws of contempt of court. The bill seeks to spell out what constitutes contempt of court and the punishments in relation to it -- maximum penalty is a fine up to $20,000 and/or jail term up to 12 months.

One of the three instances of contempt of court is publishing material that interferes with on-going proceedings. This has raised concerns among some Singaporeans -- 249 Singaporeans signed a petition, which was submitted to Parliament by NMP Kok Heng Leun, contending that this may restrict legitimate discussion of issues that are of public interest.

Lee's issue with the bill

This too caught Lee's attention and in her Facebook post she expressed concern that the punishments for contempt are "very serious penalties for someone who may just want to speak out against an unfair judge and/or an unfair government" and that "this bill will gag public debate on issues that are important to Singaporeans."

In the post she said she had written a letter to the Straits Times in 2008 to speak out against a sentence for former CK Tang head Tang Wee Sung. He was sentenced to a day after he had tried to buy a kidney illegally.

Lee had help wording the letter from two lawyers from Allen and Gledhill, Lucian Wong and K Shanmugam (who is now the Law and Home Affairs Minister). She said that both lawyers "encouraged and supported" her to write the letter. She also said that "now being on the side of the government, Minister Shanmugam seems to see justice only from the point of view of the government and the AGC always being right."

She apologised for embarrassment caused

Following that post, Lee made another Facebook post where she said that Minister Shanmugam had spoken to her to clarify that what she wrote in 2008 was allowed under the current law, and that it would still be allowed under the new bill. She said she was wrong in her assumptions and "relieved by the clarification given by Mr Shanmugam, and I apologise for any embarassment (sic) I may have caused to Mr. Shanmugam."

Taking issue with Channel NewsAsia's report on her apology

Shortly after her second Facebook post, Channel NewsAsia reported on her statement with the headline "Lee Wei Ling apologises for attacking Bill on contempt of court." The report focused largely on Lee's letter about Tang's sentence and Minister Shanmugam's clarification, and also included a sentence on how Lee found that the punishments for contempt are "very serious penalties for someone who may just want to speak out against an unfair judge and/or an unfair government".

Lee made a third posting and said that CNA's report "seems to imply that I retract my entire first post of today." Lee said she only retracted the part about Tang and that she stood "by the rest of the statements". She said that the Bill "which will be passed in parliament tomorrow gives the government the right to comment whilst denying that to people. This is inconsistent with equality before the law and is an attempt to muzzle public opinion." 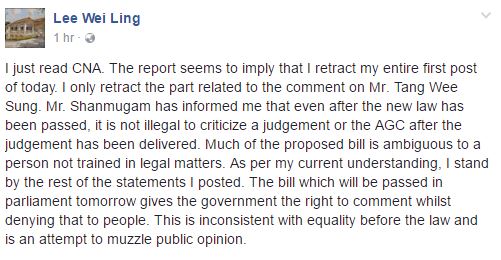 In July 2016, Minister Shanmugam had said that the bill clarifies and crystallises processes, while the law would remain broadly the same. The bill also clarifies what does not constitute as contempt of law, such as fair and accurate reporting of court proceedings. He added that the Attorney General would use its discretion applying the law and raised the following example:

"Let's say your son has been killed by someone, or you believe your son has been killed by someone. That person is facing charges. You say in anguish that 'This person is a murderer, and that he has killed my son and he ought to hang.' Now strictly speaking. that's contempt, but I think it will be unlikely that any attorney-general will prosecute such a person. People will give some latitude."

"At the same time, let's say a national newspaper or somebody with a broad reach starts a campaign to say that so and so should be found guilty, and he should hang, and mobilises public opinion in a significant way. You can see that there is a difference between the two. I'm sure the attorney-general will act in the second case."

Dr Lee's on Singaporean's lack of reaction to this Bill

Lee said that she was "amazed" that there has not been more vocal protest about this bill. She ended her post by saying that "Singaporeans have gotten used to an authoritarian government who until recently had always acted for their wellbeing, and so when another new action is taken, they do not even bother to think whether it may be against their welfare."